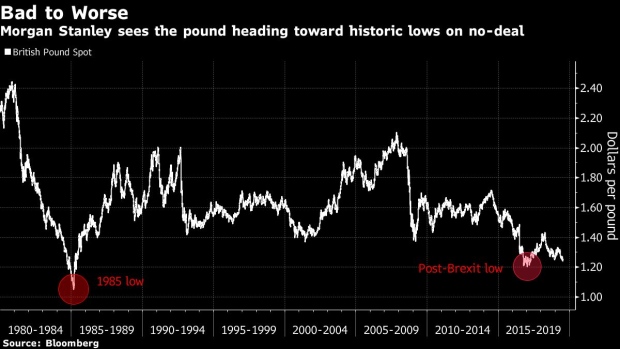 BATH, ENGLAND - APRIL 04: In this photo illustration the new 1 pound coin is seen alongside US dollar bills on April 4, 2017 in Bath, England. Currency experts have warned that as the uncertainty surrounding Brexit continues, the value of the British pound, which has remained depressed against the US dollar and the euro since the UK voted to leave in the EU referendum, is likely to fluctuate. (Photo by Matt Cardy/Getty Images) Photographer: Matt Cardy/Getty Images Europe , Getty Images

(Bloomberg) -- The pound may fall to parity with the dollar on a no-deal Brexit, according to Morgan Stanley.

A drop to historic lows would come under the market’s worst-case scenario of the U.K. leaving the European Union without a deal, a risk that the bank says is growing. The pound hit a two-year low below $1.24 Wednesday after both contenders for prime minister hardened their Brexit rhetoric, and for Morgan Stanley it could get much worse with a tumble to $1.00-$1.10 on a crash exit.

The only time the pound has dropped below $1.10 was in 1985, when it briefly touched $1.05 after the U.S. devalued its currency to fight a strong dollar. A Bloomberg survey of strategists in March saw the pound falling to $1.20 on a no-deal Brexit, yet the currency has been the world’s worst performer since then to take its drop from the 2016 Brexit referendum to 17%.

“The pound has come under intense selling pressure since Prime Minister May withdrew from her party leadership position, leaving markets with increased concern that the U.K. may be heading towards a harder Brexit,” said strategists including global head of currency strategy Hans Redeker. “Should this scenario materialize, pound-dollar could fall into the $1.00-$1.10 range.”

A 19% plunge to parity with the dollar would rival the currency’s 25% tumble on Black Wednesday, when the U.K. was forced to withdraw from the European exchange-rate mechanism. The Bank of England also said in November that the pound could fall to below parity with the dollar under a no-deal scenario, an analysis that was decried as too negative at the time.

A meeting of Brexit negotiators last week was one of the most difficult of the last three years, according to European officials, who are bracing for talks to become more hostile under the next British government. Should the new prime minister pursue a tough negotiation stance, the pound could drop into a $1.10-$1.20 range, Morgan Stanley said.

To contact the editors responsible for this story: Ven Ram at vram1@bloomberg.net, Neil Chatterjee