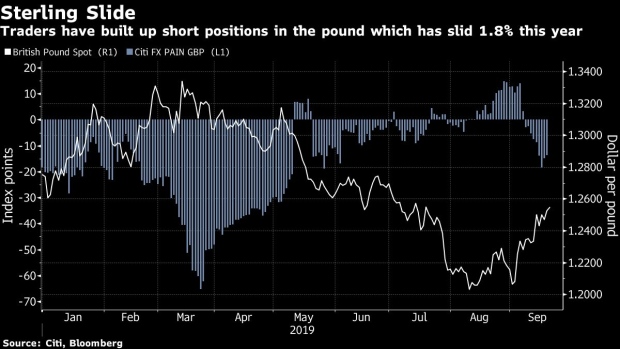 A collection of British one pound coins are displayed in this arranged photograph in London, U.K., on Monday, Aug. 5, 2019. The pound will tumble to the lowest level since 1985 if the U.K. leaves the European Union without a deal, a prospect that looks more likely now than six months ago, according to a Bloomberg survey of analysts. Photographer: Chris Ratcliffe/Bloomberg , Bloomberg

Sterling could tumble to parity with both the dollar and the euro if the U.K. crashes out of the European Union without a deal, according to Shamik Dhar, chief economist at BNY Mellon Investment Management.

“It’s pretty clear under ‘no deal’ you’ll get a very big fall in sterling -- I’d say 10% to 15% from here,” said Dhar, a former senior manager in monetary analysis at the Bank of England. “We’ll test parity against the euro, probably the dollar as well in that circumstance, and we’ll be entering a world where the central bank will be cutting rates.”

The pound has declined about 16% against the dollar since the U.K.’s referendum to leave the bloc in June 2016, with the currency swinging on every political development. It rose as much as 0.7% to the highest in two months on Thursday after Sky News reported that European Commission President Jean-Claude Juncker thought a Brexit deal can be reached by Oct. 31.

If the U.K. manages to clinch a deal to leave the bloc amicably, sterling is likely to rise about 5% from the 1.25 level, Dhar said in an interview in Singapore Thursday. For those looking to trade the currency as the Oct. 31 deadline draws near, buying volatility options remains one of the best strategies, he said.

“Vol is expensive yes, but, it’s still one of the best ways to play cable as the currency fluctuates,” he said. “For those who can’t, I’ve been advising to be long the FTSE 100, which has a lot of companies with foreign earnings.”