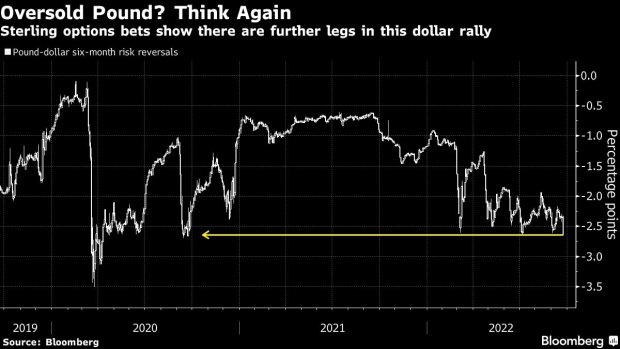 Can the pound reach parity versus the dollar? It’s now a one-in-four chance when it comes to options pricing.

The UK currency is heading for its biggest daily loss since early May after Chancellor of the Exchequer Kwasi Kwarteng outlined the government’s plans to stimulate the economy with tax cuts and spending. The simultaneous sharp sell off in Gilts suggests that tackling inflation will be a very hard task for UK authorities and that the currency market sees no easy way out for the Bank of England.

To attract foreign investors, a weaker pound may be the answer and that is what FX traders are betting on.

Cable fell as much as 2.1% to touch $1.1021, the lowest since March 1985, and was at $1.1036 as of 12:38pm in London. Risk reversals, a barometer of market positioning and sentiment, show that traders see the greatest downside risks for the pound over the medium term in two years.

According to Bloomberg’s options pricing model, the pound holds a 26% chance of touching parity versus the greenback in the next six months. That compares to a reading of 14% Thursday.