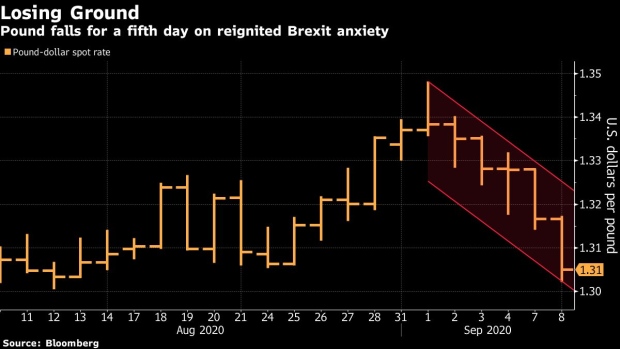 A pound sign hangs near a Union flag, also known as a Union Jack, on a tourist souvenir stall in Piccadilly Circus in central London, U.K., on Thursday, Aug. 22, 2019. The weaker pound has contributed to boosting tourist arrivals to the U.K., which are likely to reach 38.9 million arrivals this year, nearing a record set in 2017, according to VisitBritain, the national tourism agency. Photographer: Simon Dawson/Bloomberg , Bloomberg

The pound slumped for a fifth day, the longest losing streak since May, and weakened as much as 1.1% to $1.3022. Money market traders are stepping up bets on negative interest rates and the FTSE 100 Index dipped 0.4%.

Johnson has threatened to walk away from Brexit talks without a new trade deal, despite warnings that a hard split would cripple economic growth. Investors were also spooked by comments from the Bank of England’s chief economist in support of ending the wage-support programs.

“The tense start to the next round of Brexit negotiations has provided the main catalyst for the move,” said Ned Rumpeltin, European head of foreign-exchange strategy at Toronto-Dominion Bank. “There remain underlying concerns about the strength and sustainability of the U.K.’s recovery.”

Money markets are betting the central bank will cut rates by 12 basis points in May, which would push them into negative territory. As recently as Monday, traders were factoring in rates remaining above zero for as late as September 2021.

Currency option prices signal that traders are concerned about the pound over year-end when the Brexit transition period will expire. Bearish bets over the next three months have risen by the most since mid March.

Heightened tension between the U.K. and the EU is also driving investors to seek the safety of government debt. On Tuesday, Britain held its first syndicated debt offering since June. The country’s 15-year debt attracted bids in excess of 76 billion pounds ($99 billion), according to a person familiar with the sale, who asked not to be identified because they’re not authorized to speak about it.