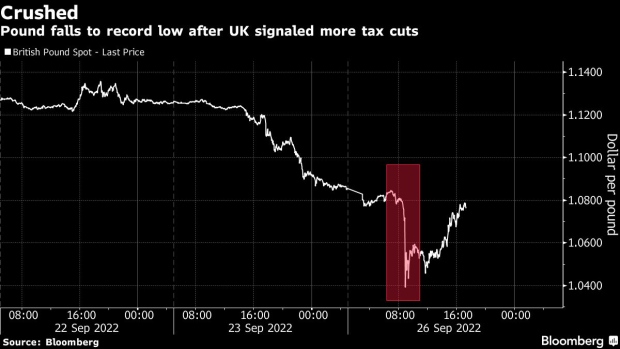 (Bloomberg) -- The pound is BlueBay Asset Management LLP’s biggest currency short position on the expectation that authorities can do little to halt its slide.

“Short GBP is the largest FX short we have held this year,” said Mark Dowding, chief investment officer of the fund, which manages $112 billion in assets. “We are not changing this view and think that a move toward parity is likely.”

The pound crashed to a record low on Monday, fueled by fears the government’s new fiscal plans will send inflation and debt soaring. It dropped to as low as $1.0350, with options markets showing 45% odds of the currency hitting parity with the dollar this year as of 10:40 a.m in London.

The slide, which takes the pound’s loss against the dollar to more than 20% this year, has sparked speculation by strategists that the Bank of England will have to hike aggressively to stem capital outflows. But even that may not be enough, said Dowding.

“An emergency rate hike would probably be a catalyst for a vote of ‘No Confidence’ in the Truss government and would see political crisis,” he said. “For now we think the Bank of England does nothing. The pound will weaken, but this should be more of a gradual slide.”