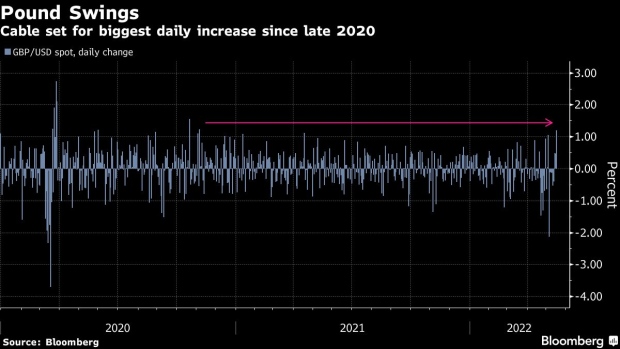 Morning commuters walk past skyscrapers including 30 St. Mary Axe, also known as The Gherkin, left, in the City of London, UK, on Monday, May 16, 2022. The Office for National Statistics (ONS) will release the latest UK Labor Market Statistics on Tuesday. , Bloomberg

(Bloomberg) -- The pound rallied the most against the dollar since December 2020, as better-than-expected UK jobs numbers attracted traders to the beaten-down currency.

Sterling jumped as much as 1.4% to 1.2488 in the wake of data that showed declining unemployment and job vacancies still at record levels. Gilts slumped, while traders bolstered bets on Bank of England rate increases, wagering on around 32 basis points of hikes at next month’s meeting.

The pound has been driven to depths not seen since the early months of the pandemic by gloomy economic forecasts and more cautious commentary from BOE policymakers about the tradeoff between preserving the economy and curbing inflation. Further uncertainty over the future of the Northern Ireland protocol has also cast a shadow over the currency.

“People don’t need too strong an excuse to buy sterling right now,” said Geoffrey Yu, strategist at BNY Mellon. “Even a modicum of good data or even data that isn’t as bad as previously expected can see them coming back because of valuations.”

The move accompanies a broader dollar decline, with the greenback underperforming all Group-of-10 currencies bar the Japanese yen as risk sentiment rebounded. The Bloomberg Dollar Spot Index is set for its longest daily losing streak since March.

Still, some strategists contend that the job numbers don’t amount to a game changer for the fundamentals of the UK economy. Inflation data due Wednesday is expected to show consumer prices increasing at 9.1% year-on-year in April, eating into spending power even as wages rise.

BOE Governor Andrew Bailey told lawmakers on Monday that this squeeze would both damp activity and increase unemployment.

“We think there has been a notable shift at the BOE from inflation itself to the negative growth implications of higher inflation,” said Adam Cole, currency strategist at RBC Capital Markets. “So we expect rate expectations to reprice lower going forward.”