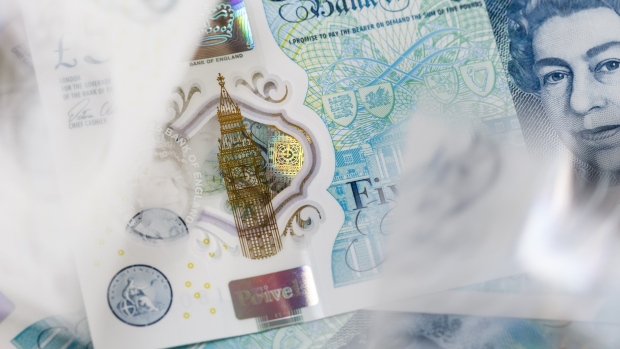 The Elizabeth Tower, also known as Big Ben, is seen on a British five pound banknote, in this arranged photograph in London, U.K., on Thursday, Oct. 13, 2016. , Miles Willis/Bloomberg

The pound rallied the most against the dollar since March on signs that Britain and the European Union are edging closer to an agreement on the core sticking points in negotiations around Brexit.

The gains gathered momentum and one-month options turned the most positive on sterling since January 2018 after U.K. Prime Minister Boris Johnson and Irish premier Leo Varadkar said in a statement that they could see a “pathway” to a possible divorce deal following talks in northern England.

The pound gained as much as 2.2 per cent, and was last up 2.1 per cent to US$1.2458. The advance came against a broadly weakening dollar amid optimism over U.S.-China trade talks. The pound strengthened 1.7 per cent to 88.41 pence for euro.

The pound is the day’s strongest Group-of-10 currency relative to the dollar, and it’s on course for the largest advance since the U.K. Parliament rejected leaving the EU without a deal in March.

“This sharp bounce seems to confirm the presence of lingering speculative short positions in the pound that are being unwound in a scramble in late trade,” said Koon Chow, a strategist at Union Bancaire Privee. “Although the joint statement was light on details, it strengthens our expectation that there will be an extension rather than a no-deal Brexit at the end of this month. But there are still election risks, and accordingly a pound recovery has some obstacles ahead.”

EU leaders will meet next week for a summit that may determine whether Britain will reach an accord, seek an extension, or head for a hard exit that some banks expect could wipe 10 per cent off the value of the U.K. currency.

The pound edged back toward its highest level of the day after Sky News reported that U.K. negotiators are proposing a “pared-down free trade agreement” to end the stalemate. The offer was part of Johnson’s pitch on Thursday, according to Sky.

“Worryingly, we have no clever way to judge the likelihood of today’s optimism lasting until the weekend, let alone longer,” SocGen analysts wrote in a note dated Thursday. “But sterling’s bounce highlights the market’s pricing of the likelihood of a no-deal exit. Take that off the table and EUR/GBP will return to 0.85.”