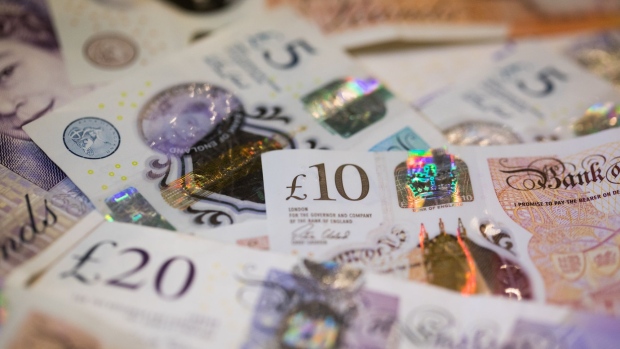 A collection of British five, ten, and twenty pound sterling banknotes are displayed in this arranged photograph in London, U.K., on Monday, Aug. 5, 2019. , Bloomberg

The pound rose and U.K. government bonds slid after the Bank of England voted to leave rates on hold in its latest policy decision, with the same voting split as at the last meeting.

Ahead of the announcement, money markets were largely pricing a rate cut from the central bank by next December, amid renewed concerns over a no-deal Brexit. The 7-2 vote and the comments from the central bank that a modest rise in the key rate may be needed if risks don’t materialize were taken positively by the market. Some economists had also expected a third dissenting voter at the December meeting.

“If global growth momentum stabilizes and Brexit uncertainty doesn’t rise further then they certainly reached the lower bound and may even consider higher rates down the road,” said Manuel Oliveri, a strategist at Credit Agricole SA. “It is nothing really new but goes against the latest rise in easing expectations. Assuming improving business activity with the start of next year, rate expectations are likely to stabilize and that may prevent more sustained currency downside.”

The U.K. currency’s recent winning streak ended abruptly with the news earlier this week that Boris Johnson would seek to set a legally binding deadline of December 2020 to leave the European Union, bringing back the risk of a no-deal Brexit and dashing market hopes that a strong Conservative majority would lead to increased political stability. Investors also moved in to price in a higher chance of a rate cut next year, with Deutsche Bank AG betting on a January cut on persistent Brexit uncertainty.

--With assistance from Anooja Debnath.