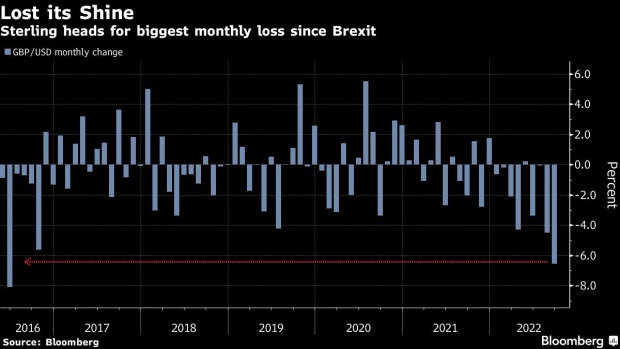 A stallholder counts out ten-pound banknotes at a market stall in Croydon, Greater London, UK, on Monday, Sept. 26, 2022. The Bank of England may need to step in with an emergency rate rise to calm market nerves about the government’s economic plans, Conservative lawmakers said after the pound tumbled to a record low against the dollar. Photographer: Jason Alden/Bloomberg , Bloomberg

Sterling rebounded from earlier losses Thursday, climbing more than 1% to the highest since Friday as gilt yields came off their highs. The currency had started the day down after Prime Minister Liz Truss defended her package of unfunded tax cuts.

The 10-year bond yield surged as much as 21 basis points to 4.22% after Truss’s comments but declined back to 4.1%. And while the pound then reversed losses of around 1%, the currency is still on track for its worst month since 2016.

The latest moves continue the upheaval seen across UK markets in the wake of the government’s mini-budget. The pound hit its lowest-ever level against the dollar on Monday, borrowing costs soared and the Bank of England was forced to step in to prevent a pension-fund crisis.

“I’d suspect that stabilization in gilts would lead to some short-term profit taking,” said Bipan Rai, head of foreign-exchange strategy at Canadian Imperial Bank of Commerce, of the pound’s move upward. But “I don’t think the fundamental reason to remain short GBP has changed much, if at all. The BoE’s actions yesterday have made it clear that GBP is a secondary concern to stabilizing the move in long-end gilts.”

Disorderly bond market conditions may have been soothed by the BOE’s intervention on Wednesday, but the action will do little to restore confidence, according to some strategists. Other currencies around the world were also under pressure, and her economic policy was the “right plan” for the UK, Truss said in radio interviews.

“The reality is that the BOE has applied a temporary sticking plaster to a fiscal-credibility issue,” said Rabobank strategists including Richard McGuire in a note to clients. “We think that the market will keep pushing the BOE to make greater and greater intervention – but the problem will not be solved without a change in the message on the fiscal side.”

The UK’s fiscal plan has attracted criticism from the International Monetary Fund and US government officials, on the grounds that these stimulus measures would fuel inflation. Some members of Truss’ own Conservative Party are also calling for their reversal and retailers are warning of the impact of sterling’s depreciation.

Traders are bracing for further volatile action in the pound, with the cost of hedging for swings against the dollar over the next month at levels comparable with the pandemic outbreak and the Brexit vote in 2016.

While other maturities are slumping, the BOE’s targeted intervention in longer-dated UK government bonds to quell the turbulence in that sector is taking effect. Even as two-year yields surged and were still trading higher as the currency snapped losses, 30-year yields are trading mostly unchanged on the day around 3.91% as of 11:20 a.m. New York time.

The BOE has “managed to disconnect the long end from the rest of the curve,” said Rohan Khanna, a rates strategist at UBS AG.

The BOE’s pledge to buy these notes for a limited period was intended to calm turbulence exacerbated by forced selling from pension funds to meet collateral calls following the volatility in rates markets. That sparked a record rally in 30-year bonds, with yields closing over 100 basis points lower on Wednesday.

Some strategists have been calling for the BOE to also deliver a more aggressive tightening policy to support the currency, but even that could fail to coax investors back, according to Steven Barrow, head of G-10 strategy at Standard Bank.

“We fear that the market will still see this crisis-like situation as being generated by the government, and one the government will have to fix through an embarrassing policy reversal,” he wrote in a note to clients. “If not, we fear the pound will fall much further.”

(Updates with context in first paragraph, comment in fifth and new chart.)