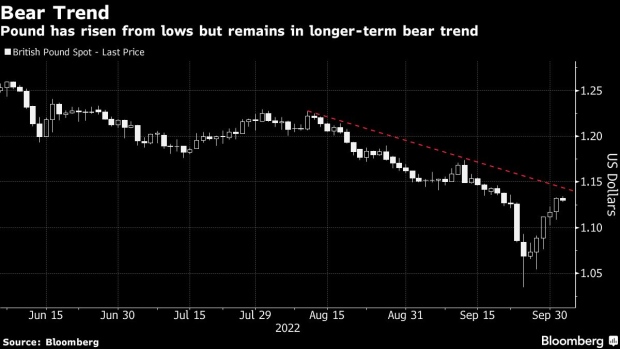 A cash tray holding British pound banknotes and coins in a shop in Barking, UK, on Tuesday, Sept. 13, 2022. As the UK enters a period of public mourning after the death of Queen Elizabeth II, data releases are likely to show a temporary reprieve in inflation and a jump in wage growth. Photographer: Chris Ratcliffe/Bloomberg , Bloomberg

(Bloomberg) -- The pound has rallied more than 10% from last week’s lows against the dollar but most strategists are sticking to bets that the UK currency will resume losses, with some predicting a new record low by year-end.

Entering its sixth straight day of gains, sterling is poised to post its longest rally since April 2021, bouncing off last week’s record low of $1.0350.

Bank of England interventions to shore up the country’s bond market have boosted the pound, but have also ramped up expectations for UK interest-rate rises, which strategists at Barclays say “may translate to a weaker pound down the line.”

Standard Chartered Plc and Royal Bank of Canada both expect sterling to weaken almost 10% from current levels by year-end after government policy missteps undermined confidence in the currency. Nomura Holdings Inc. and Morgan Stanley are among those forecasting it will slip to parity during the same period, according to data compiled by Bloomberg.

The pound tumbled to its current all-time low of $1.0350 on Sept. 26, recovering as the government backed off its pledge to scrap a proposed tax cut. It was at $1.1380 on Tuesday.

Here are some comments from strategists about what might lie ahead: