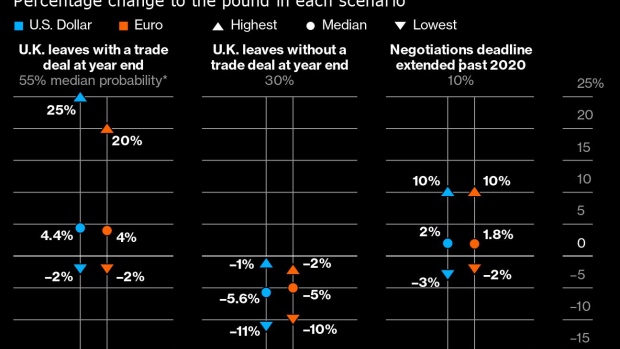 British twenty pound notes sit in this arranged photograph in Danbury, U.K., on Monday, March 23, 2020. The pound rose, boosted by broad dollar weakness, after the U.K. government banned all unnecessary movement of people for at least three weeks in order to reduce the spread of coronavirus. Photographer: Chris Ratcliffe/Bloomberg , Bloomberg

(Bloomberg) -- The pound will get a limited boost from a Brexit trade agreement this year, as the virus continues to drag on the economy, a Bloomberg survey found.

A deal between the U.K. and European Union after testy negotiations is the base case that would drive sterling up 4.4% to above $1.30, according to the poll of 26 market strategists. That’s the level the currency was at in March before the coronavirus locked down London, the world’s largest foreign-exchange trading hub.

“EU and U.K. leaders recognize that the last thing anyone needs right now is a disruptive no-deal Brexit,’ said Simon Harvey, a currency market analyst at Monex Europe Ltd. “Even if it’s just a bare-bones deal that avoids large scale goods tariffs going up, some type of agreement is likely to get inked this year.”

The respondents see a 55% chance of a trade deal, although some agree it’s unlikely to be a substantial one.

The lift for sterling, which has acted as a market barometer through four years of Brexit twists and turns, would hardly be a ringing endorsement from investors. It would still leave the currency down about 13% from before the June 2016 referendum.

Brexit has led to falling confidence in British politics and the economy, with the saga likely to continue into 2021 and beyond as the two sides untangle decades of relations and the U.K. seeks trade deals elsewhere.

The poll put the chances of the trade talks being extended beyond the 2020 transition period at 10%, even though the U.K. government has made it clear it won’t ask for one. A delay would mean a small gain of around 2% for sterling into the end of the year, the survey found.

The prospect of no trade deal still looms, with respondents seeing a 30% chance. While that could see sterling tumble 5.6% to $1.18, currency analysts seem to have become less pessimistic on this scenario. A similar survey last August suggested the pound would slump to $1.10, a level not seen in more than three decades.

A worst-case scenario would be a double whammy of no deal plus a second wave of coronavirus infections that triggers another lockdown in the U.K. That could drag sterling to $1.14 and push it toward parity with the euro, respondents said.

Whichever way Brexit ends, most analysts aren’t positive on the outlook for the U.K. economy. When asked to rate Britain’s prospects out of 10, the median response was four. That follows the blow from the virus lockdown, which led the pound to plunge near $1.14 in March, its weakest since 1985.

“It is hard to find good news on the U.K.,” said Ned Rumpeltin, the European head of currency strategy at Toronto-Dominion Bank. “The country was late into the lockdown and is now dragging its feet on the way out. Brexit remains a nagging concern. Even in a best case scenario, this will hinder the U.K.’s recovery well beyond next year.”