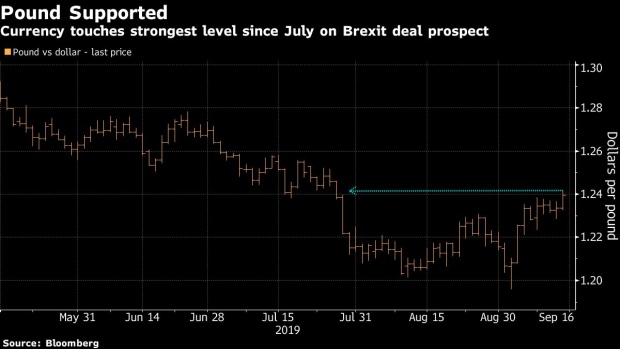 The Elizabeth Tower, also known as Big Ben, is seen on a British five pound banknote, in this arranged photograph in London, U.K., on Thursday, Oct. 13, 2016. The U.K. currency is getting harder to trade, and to predict, because the nation’s exit from the European Union has changed the rules of engagement. Photographer: Miles Willis/Bloomberg , Bloomberg

(Bloomberg) -- The pound headed for the biggest weekly gain since May against the dollar after reports of U.K. politicians softening their stance on Brexit rekindled optimism about a potential deal. Gilts fell as demand for the safety of government debt waned.

Sterling led Group-of-10 currency gains after the Times reported that the Democratic Unionist Party, an ally of the ruling Conservative Party, would accept a new agreement to replace the contentious Irish backstop. The pound, which also benefited from broad dollar weakness, extended its rally even after some DUP members pushed back against the news.

The news “was denied a bit later on but seems to have caught markets by surprise,” said Valentin Marinov, the head of G-10 currency research at Credit Agricole. “I think markets smell there could be a deal after all.”

“There’s been some optimism over a Brexit deal involving an all-Ireland backstop in recent days,” said Lee Hardman, a currency strategist at MUFG. “More immediate no-deal Brexit and U.K. recession risks have both eased recently, encouraging a relief rally for the pound. Broad-based dollar weakness on the back of U.S.-China trade talk optimism is helping to lift cable as well.”

To contact the reporter on this story: Anooja Debnath in London at adebnath@bloomberg.net

To contact the editors responsible for this story: Ven Ram at vram1@bloomberg.net, Anil Varma