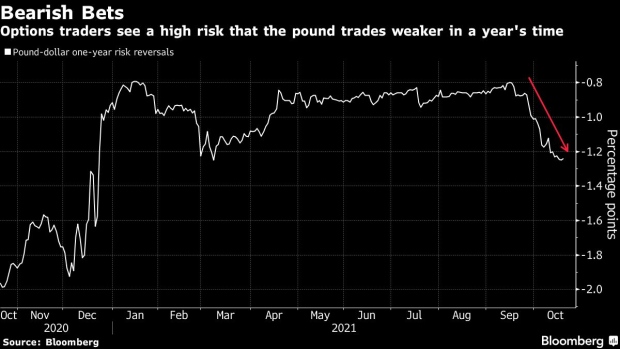 The Bank of England (BOE) building stands in the City of London, U.K., on Monday, July 30, 2018. The BOE is widely expected to raise the rate to 0.75 percent, the second hike since November. Photographer: Jason Alden/Bloomberg , Bloomberg

Uncertainty plagued the pound’s outlook during the tortuous years of Brexit negotiations. Now the Bank of England has brought it back.

Signs that policy makers are accelerating toward an interest-rate hike have traders fumbling around to figure out what that means for sterling. Money managers at Jupiter Asset Management and Aberdeen Asset Management turned neutral in recent days, following similar moves by Amundi SA and William Blair Investment Management.

Markets are now betting that BOE tightening could happen as soon as next month, the start of more than 100 basis points of action by the end of 2022. But the traditional link between higher rates and a stronger currency isn’t holding given other factors in play.

With the economy weakening, Covid cases increasing and sky-high energy prices squeezing consumers, there’s concern that hiking now is the wrong move. Rates markets suggest any BOE action now could even be reversed within two years, which is further fueling the currency confusion.

Strategists, meanwhile, have shifted and see the pound stuck around current levels. Their median year-end forecast is now $1.37, down from as high as $1.43 four months ago, according to a Bloomberg survey of 76 firms.

“There is a lot of uncertainty,” said Jane Foley, head of foreign-exchange strategy at Rabobank in London. “It’s easy to argue that rates going up will strengthen the pound. But the risk of a policy mistake means the BOE could hike soon but then won’t be able to follow through” with further tightening.

As the market struggles for direction, institutional fund managers have scaled back bearish bets from their most extreme levels in two years. Hedge funds have trimmed bullish wagers for a third week, the longest stretch since July.

Thomas Clarke at William Blair, whose Dynamic Diversified Allocation Fund has outperformed 85% of peers this year, turned to neutral from long sterling this month. The pound no longer looks undervalued, he says, and while BOE tightening may provide mild support for the currency, it won’t help if it’s not accompanied by economic growth.

Meanwhile Amundi switched to neutral from bearish on concerns about damage from Brexit, according to portfolio manager Anne Beaudu. Tension between the U.K. and the European Union over Northern Ireland has threatened to escalate into a trade war, though Prime Minister Boris Johnson promised this week to find a solution to the issue.

The economic outlook is being further challenged by expiry of the jobs furlough program, the end of a boost in welfare payments and looming tax hikes.

But Bailey’s dramatic comments on Sunday have put the focus on inflation risks. Then on Thursday, data showed U.K. consumer-price growth at 3.1% in September, well above the BOE’s 2% target.

Despite the governor’s tough talk, options traders are bearish on the pound longer term. Sentiment over the coming year is near its most negative since December, according to a gauge of market positioning.

It’s all enough for Aberdeen’s James Athey, a notable bull, to end his bets on the currency strengthening.

“In the market’s mind the U.K. was possibly facing stagflation and we had begun to observe the pound behaving more like an emerging-market currency,” he said. “While we disagree we felt it prudent to move to the sidelines.”