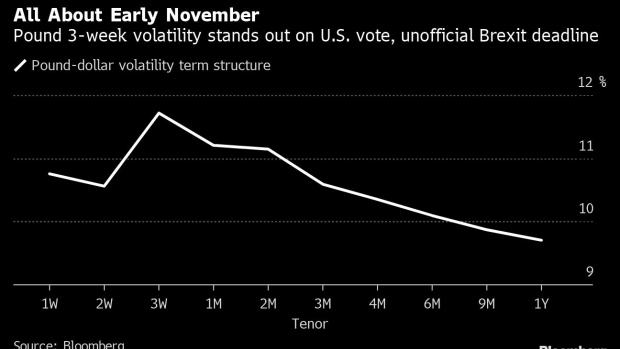 A stack of one pound sterling coins stand in front of a British ten pound banknote in this arranged photograph in London, U.K., on Wednesday, Oct. 14, 2020. Pound traders are remarkably nonchalant even as U.K. Prime Minister Boris Johnson's self-imposed deadline of Oct. 15 to get a trade deal with the European Union looms large. Photographer: Hollie Adams/Bloomberg , Bloomberg

For pound traders who have weathered more than four years of Brexit talks, anything short of a resolution one way or the other by the beginning of November is a distraction.

Analysts say that in order for both sides to prepare for new trade terms in 2021, there needs to be at least a broad outline of what they’ll be at the start of next month. Combined with what could be a contentious U.S. presidential election, that is leading to the cost of hedging against swings in the pound peaking in three weeks.

“Two months is the absolute minimum required to legislate for a deal, if one is done,” said Adam Cole, head of currency strategy at RBC Europe. “So early November is the real deadline. If it’s clear at that point that we are heading for no deal for sure, we have around 5% downside across the board.”

Traders weren’t overly vexed by Prime Minister Boris Johnson’s announcement on Friday that the U.K. is preparing to leave the bloc without a trade deal, with MUFG Bank foreign-exchange strategist Lee Hardman describing the comments as political posturing. While the pound swung between gains and losses of at least 0.3%, it was little changed around $1.2920 by the end of the London trading day.

Traders have grown accustomed to filtering out political noise, after suffering years of negotiations that yielded no results and seeing deadlines come and go. Also, this time around, trade talks are competing for market impact with the spread of the coronavirus.

Even with the U.K.’s transition period from the EU ending soon, sterling is pricing in only a “modest” no-deal risk premium, according to MUFG. It recommends a short tactical position on the pound versus the dollar given rising Brexit risks and a surge in virus cases.

“The outlook for the U.K. economy is darkening heading into year-end, which could encourage the Bank of England to deliver more stimulus next month,” MUFG’s Hardman and Derek Halpenny said in an emailed note.

Jobless figures are up the most on record after the spread of Covid-19 caused the worst recession in more than a century. The downturn has already led to record-low Bank of England interest rates and money market bets on further cuts, another millstone for any gains in the currency.

Johnson said the nation is preparing for an Australian-style trade deal with the EU, which is essentially a no-deal Brexit. Companies would trade on terms set by the World Trade Organization in most areas, with tariffs on goods and an agreement on the processes to reduce some regulatory barriers.

The U.K. and EU’s chief negotiators, David Frost and Michel Barnier, will speak again early next week. Irish foreign minister Simon Coveney warned on Thursday that once negotiations move into November, the two sides are running out of time to reach a deal. German Chancellor Angela Merkel signaled that the EU should make a move in the U.K.’s direction.

“Sterling is really just waiting for whether to move in the deal or no deal direction, and I’d be concerned if there wasn’t an agreement by the end of November,” said Mikael Olai Milhoj, an analyst at Danske Bank A/S. “While the U.S. election will cause volatility for all currencies, November will be particularly bad for the pound.”