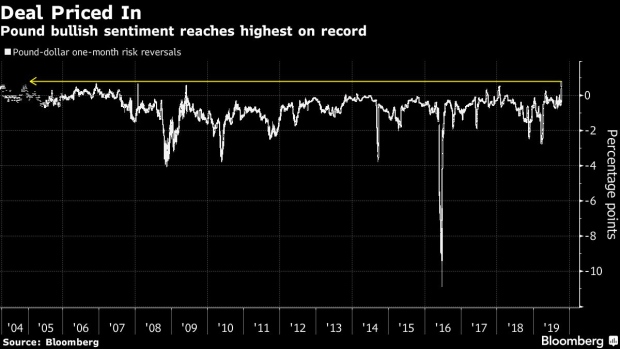 British one pound coins sit in this arranged photograph in London, U.K., on Monday, May 20, 2019. The pound headed for the longest losing streak against the euro since the turn of the century as rising U.K. political risks fanned concern about the nation’s ability to achieve an orderly Brexit. Photographer: Jason Alden/Bloomberg , Bloomberg

(Bloomberg) -- Pound traders are more optimistic -- or worried -- than ever before that a Brexit deal is possible, based on derivatives pricing.

Options show investors are the most bullish on the U.K. currency on a one-month basis that they’ve been since Bloomberg began compiling the data in 2003. The upswing follows Thursday’s positive meeting between U.K. Prime Minister Boris Johnson and Irish Premier Leo Varadkar.

Risk reversals, a barometer of market sentiment and positioning, surged for options that benefit from a stronger sterling after Varadkar said he believed an agreement is possible by the Oct. 31 deadline.

The pound rose by the most in seven months as traders unwound bets that sterling would weaken. It extended gains Friday, climbing 0.2% to $1.2462.

On longer tenors, investors remain more cautious. While demand for options that look for a weaker pound has waned, the market is still biased in favor of downside protection. That may partly reflect the dollar’s allure amid global growth concerns and trade jitters. A further improvement in market sentiment could come from trade talks between the U.S. and China, and that in turn may see bets on a stronger pound gain additional traction.

To contact the reporter on this story: Vassilis Karamanis in Athens at vkaramanis1@bloomberg.net

To contact the editors responsible for this story: Paul Dobson at pdobson2@bloomberg.net, Anil Varma