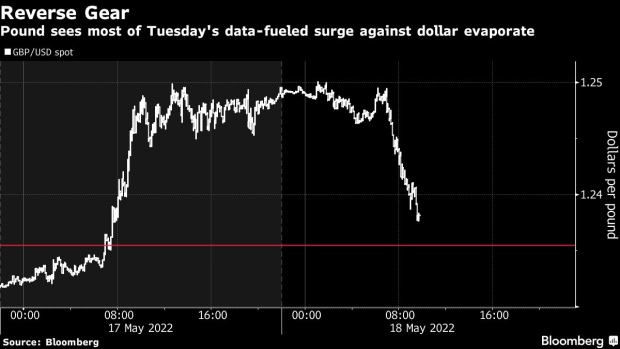 The Bank of England (BOE) in the City of London, U.K., on Thursday, March 17, 2022. The Bank of England, the first among major central banks to tighten monetary policy after the pandemic, looks all but certain to reach another milestone on Thursday by taking interest rates back to their pre-Covid level. Photographer: Bloomberg/Bloomberg , Photographer: Bloomberg/Bloomberg

(Bloomberg) -- The pound tumbled back near a five-year low as traders speculated that the Bank of England will struggle to rein in inflation and avoid a recession.

The British currency slid 1% on Wednesday to $1.2372, snuffing out most of yesterday’s rally. The moves came on the back of data showing UK consumer prices rose to 9% in the year through April, a 40-year high.

The inflation report wasn’t as bad as most economists expected and took the prospect of higher rate hikes, which would have helped the currency, off the table. At the same time, price pressures are bound to worsen the strain on the UK economy.

“With the spectre of stagflation looming, there are expectations that the Bank may be forced to take more of a softly-softly approach,” said Susannah Streeter, senior investment and markets analyst at Hargreaves Lansdown.

The pound is the second-worst performing major currency over the last three months and was bottom of the pile today.

The currency rebounded on Tuesday on the back of labor market data showing unemployment is the lowest in decades. It’s now more-than-erased the bounce against the euro and is almost back to square one against the US dollar

While the BOE started its hiking cycle earlier than major peers, it has adopted a gloomier tone as it warns of a prolonged period of stagnation or even recession. The UK central bank, independent for over two decades, is also facing political attacks, piling pressure onto policymakers.

“The BOE reaction function has become less transparent and monetary policy more at risk of perceived politicisation,” Robert Wood, a UK economist at Bank of America Corp., said in a report.