The economy added 130,000 jobs, trailing the average estimate, while the unemployment rate held at 3.7 per cent and hourly earnings were higher than forecast. It came out four hours before Federal Reserve Chairman Jerome Powell speaks on monetary policy in Zurich. Here’s how strategists and traders reacted: 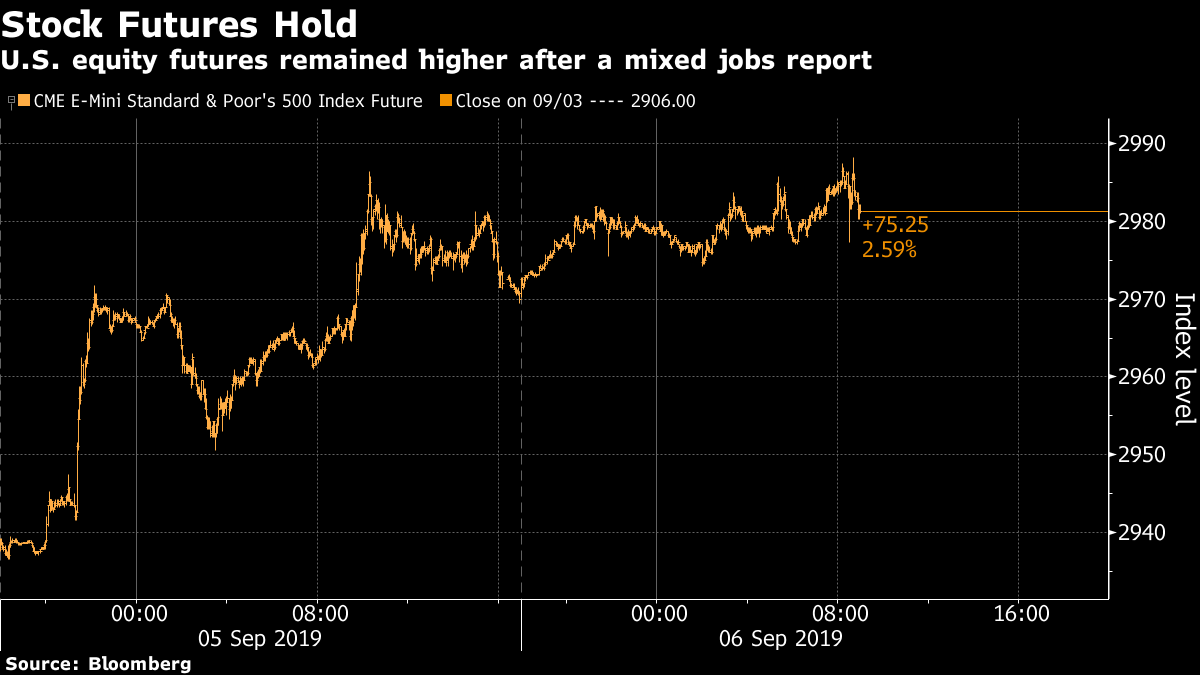 This is bullish -- keeps aggressive Fed (Powell is not rewriting his speech at 12:30 today on this number). Rates should be sideways and curve should steepen. It’s positive for equities as the report speaks to longer expansion. It’s positive for the same things that have worked (tech). Cyclicals fine on the day if risk assets move up, which they should. Given all the other consumer/employment readings have been strong, people will likely discount the headline miss -- especially given the huge jump in household employment.

The headline number was a mixed bag -- something for both the hawks and the doves. What was encouraging is the jump in hourly earnings, particularly for inflation backdrop. We’re likely to see another insurance cut in September and it’s largely priced in. It may be a bit of a hawkish cut in that the Fed will signal in that it’s not the beginning of a easing cycle and going forward they’ll be in a wait and see mode. The numbers in the U.S. We’ve been seeing isn’t consistent with a) the recession and b) four rate cuts the market is pricing it.

The print almost guarantees that the Fed is going to cut rates by 25 points. Yesterday’s ADP was higher than expected and if today’s jobs numbers were higher, there could be a lot of questions about whether the Fed was going to cut rates this month. The print doesn’t change anything, it solidifies the fact that the Fed is going to lower rates. Powell speaks later today. The Fed has pretty well signaled its stance on interest rates, Powell may confirm that today or make a little stronger statement.

Today’s jobs report shows the resiliency of the United States economy despite several global headwinds. The on-again, off-again U.S.-China trade talks continue to roil markets and, in some ways, are mirroring the on-again, off-again Brexit debate. Both issues are providing market participants with more theater than substance while the U.S. consumer tunes them out, keeps spending and keeps the U.S. economic fundamentals on track.

We’re light on the number. August is always a strange report anyway. The reason I say that is because you have some of the summer jobs that are sort of rolling off as kids go back to school or the resorts or whatever that may be open in the summer that aren’t the rest of the year. You also have the anomaly of the government hiring 25,000 workers for the census. You normally don’t see that.

The weak payrolls and higher hourly earnings are slightly negative for equities because they force us to deal with a slightly weaker economy but do not change the central bank rate path at all in our view. We would expect an eventual downtick in S&P futures to the 2,970 area where they found support last night and then the 2,950/2,954 area.

It certainly shows that the jobs market ultimately is slowing but it isn’t rapidly compressing yet at this point. Past mid-cycle, more towards late-cycle but it definitely doesn’t seem that it’s a late, late cycle yet. This one’s got a little bit in it for everybody.