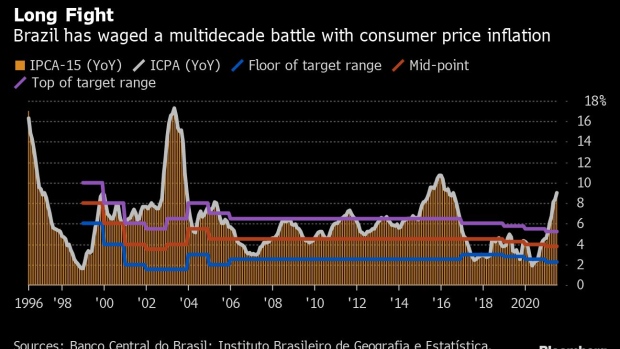 (Bloomberg) -- Federal Reserve Chair Jerome Powell is expected to hint at prospects for an eventual reduction of monetary stimulus when he gives a long-awaited speech on Friday for the Jackson Hole symposium.

The Kansas City Federal Reserve’s annual event, being held virtually again amid a coronavirus outbreak, is an opportunity for the U.S. central bank chief to shed light on officials’ intentions after minutes of the July 27-28 meeting showed most of them judged it appropriate to start slowing asset purchases this year.

The Fed is currently buying about $120 billion of assets per month -- $80 billion of Treasury securities and $40 billion of mortgage-backed debt -- and has pledged to keep up that pace until “substantial further progress” has been made toward its goals of maximum employment and 2% inflation.

“Powell could fill in some of the blanks,” said Thomas Costerg, senior U.S. economist at Pictet Wealth Management. “The recent minutes were pretty vague and there is a lot of room to give more specifics on taper timing and practicalities. It would be good to see where Powell and the rest of the board stand.”

The Jackson Hole event is traditionally scrutinized for hints on upcoming changes in stance. Some Fed leaders have used it as a platform to explain new initiatives, as Powell did last year in unveiling a new monetary policy framework.

Three-quarters of economists expect a signal of when tapering could start to be shared either at Jackson Hole or at the Sept. 21-22 decision, when the committee updates its quarterly forecasts, according to a Bloomberg survey of 51 participants conducted in July.

The symposium will take place from Thursday to Saturday. The Kansas City Fed had intended to hold the event in person at its usual location in the Grand Teton National Park in Wyoming, but announced on Friday that it would shift to a virtual format due to an uptick in local Covid-19 cases.

While this year’s topic has been revealed as “Macroeconomic Policy in an Uneven Economy,” the exact lineup of speakers other than Powell hasn’t been disclosed.

U.S. investors will also await a slew of economic data including reports on manufacturing, home sales, durable goods and personal income and spending. The figures will provide more signals on the strength of the recovery and any impact to it from rising Covid-19 cases and continued bottlenecks in supply chains.

Elsewhere, the European Central Bank will release minutes of its last decision in July and Brazil publishes inflation data, while Israel, Iceland, Hungary and South Korea all have interest-rate decisions.

Japan’s purchasing managers index and South Korea’s 20-day export figures on Monday will offer a read on how global trade is holding up as the coronavirus’s Delta variant spreads.

The Bank of Korea on Thursday is seen holding off on a rate hike in view of the worsening situation and investors will eye Governor Lee Ju-yeol’s comments for clues of whether the BOK is still on track for tightening this year.

The ECB will publish minutes of its July 22 meeting, where officials unveiled revamped guidance on their future interest-rate stance as they implemented a new monetary-policy strategy.

The release on Thursday will be scrutinized by investors for clues on the institution’s stimulus plans before a decision within months on how economic support will evolve after the current end-date of its pandemic purchase program in March.

Sentiment indicators and surveys will meanwhile give signals to policy makers on the strength of euro-zone growth, with an easing of lockdowns bolstering travel, and supply bottlenecks weighing on manufacturing. The reports include purchasing managers’ indexes and Germany’s Ifo gauge, which is seen moderating slightly from a 2 1/2-year high.

Elsewhere in Europe, Hungarian policy makers may continue stimulus withdrawal on Tuesday by raising the main rate by 30 basis points to 1.5%. The next day, Iceland’s central bank takes its own decision after becoming the first in western Europe to tighten since the pandemic by raising borrowing costs at its last meeting in May.

In Israel, monetary officials are likely to hold the base rate at 0.1% on Monday, with higher Covid-19 cases threatening the economic rebound. Observers have also been watching for signs that they will extend a $30 billion foreign-currency buying program.

Data due Tuesday will probably show South Africa’s unemployment reached a new record in the second quarter. Rising joblessness poses a threat to social stability after deadly riots in July, and could heap pressure on authorities to extend relief measures that would complicate efforts to stabilize public finances.

Nigeria is scheduled to report on Thursday that its economy expanded 6.1% in the second quarter from a year earlier, when crashing oil prices and the pandemic hit output. The same day, Zambian inflation for August is forecast to slow after the currency’s world-beating streak helped rein in import prices.

In Russia on Wednesday, industrial production data for July will give the first indication of whether the recovery is slowing down as Covid-19 case numbers pick up.

The region’s two biggest economies take the spotlight this week.

In Mexico, look for a loss of momentum in the June retail sales figures while analysts expect some slowing in the mid-month inflation data posted Tuesday. The final second-quarter output data posted Wednesday will add details to last month’s preliminary data, which showed growth of 1.5% for the quarter and 19.7% from a year earlier.

On Thursday, Mexico’s July unemployment figures may show a second straight rise in joblessness while the minutes of Banxico’s Aug. 12 meeting -- where a divided board raised the key rate 25bps to 4.5% -- posted later in the day are keenly anticipated. Mexico’s week ends with the July trade report.

Meanwhile in Brazil, mid-month consumer price data posted Wednesday will likely see inflation push above 9%, ever further over the 3.75% target.

Current account data out later in the day is expected to show a narrowing in the surplus from June while foreign direct investment likely rebounded from a weak showing a month earlier. Closing out the week, the Labor Ministry posts formal job creation data for July.