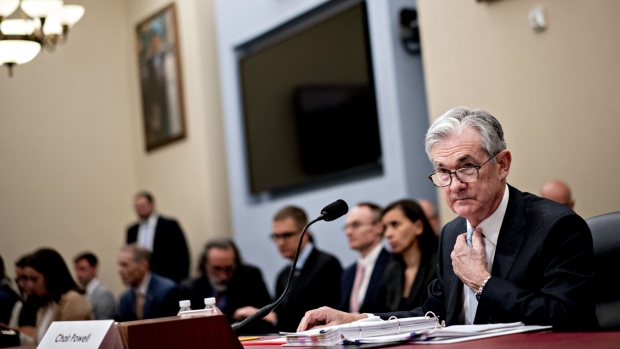 Federal Reserve Chairman Jerome Powell said this week that short-term interest rates are back under control. Not everyone’s convinced.

Brokers on Thursday are quoting repurchase-agreement rates for year-end around 3.25 per cent, or roughly one-and-a-half percentage points higher than today’s levels, and they’ve mostly been above three per cent for months. That’s a sign pressures may continue to build in the weeks ahead and evidence that there’s skepticism about Powell’s attempt to reassure markets on Wednesday.

The central bank has been injecting liquidity into the funding markets since Sept. 17, when the rate on overnight general collateral repo jumped to 10 per cent from around two per cent. The Fed also started buying Treasury bills last month to add reserves into the system. These efforts have mostly calmed repo rates. But many are yearning for more fundamental adjustments to how the market works.

Almost two months after the spike, “the Fed has used a Band-Aid to ensure the money markets don’t seize up and spike again,” said Mark Cabana, head of U.S. interest rates strategy at Bank of America. “The short-term fix is in but the longer-term plan remains very unclear.”

Market participants next week will be parsing the release of the minutes from the Oct. 29-30 Federal Open Market Committee meeting for more detail about potential long-term fixes for the funding markets. At the same time, they’ll be keeping a close eye on the central bank’s ongoing repo operations, T-bill purchases, as well as looking ahead to key crunch dates.

Speaking to members of the U.S. Congress Wednesday, Powell discussed the mid-September turmoil, saying the Fed has contained the strains within the repo market.

“I think we have it under control,” he said. “We’re prepared to continue to learn and adjust, but it’s a process and it’s one that doesn’t have implications for the economy or general public.”

He said the repo chaos might have been caused by bank reserves getting too scarce two months ago. But he also addressed the possibility -- something raised recently by JPMorgan Chase & Co. Chief Executive Officer Jamie Dimon -- that regulations clogged the plumbing, preventing banks from moving money around.

There are aspects of regulations that could be adjusted to allow liquidity “to flow more freely in the system without undermining safety and soundness,” Powell said.

Rules passed after the 2008 financial crisis were designed to ensure banks had ample liquidity if a market shock made them unable or unwilling to lend to each other. Senator Elizabeth Warren, a Democratic front-runner to challenge Donald Trumpin the 2020 election, recently warned Treasury Secretary Steven Mnuchin not to tinker with these requirements — which include so-called liquidity coverage ratios — since they’re meant to prevent catastrophes.

But on Oct. 30, Powell brought up one possibility that would be an alternative to lowering capital and liquidity requirements: letting banks run “daylight overdrafts” in their Fed accounts — meaning they could have gaps between payments and settlements during the day as long as they closed them by the close of business.

FTN Capital Markets strategist Jim Vogel said the next test for the money markets will be appetite for the Fed’s term repo offering that bridges the U.S. Thanksgiving holiday and month-end.

The New York Fed is expected to release new schedules on Thursday for its repo operations. It’s also set to outline the schedule for reserve management and reinvestment of Treasury purchases.

Once month-end is out of the way, Vogel said the next flash point for the funding markets will be Dec. 16, which is when the next quarterly corporate tax payment comes due and Treasury coupon auctions will settle. The September tax due date coincided with the big repo-market disruption. These events will transpire as financial institutions retreat from repo to shore up their year-end balance sheets for regulatory purposes.

The regulatory pullback is why Bank of America’s Cabana is still concerned about late December and said the liquidity and Treasury-purchase schedules should provide clarity as to whether the central bank shares those same concerns. He said longer-term repo tenors or an increased amount of T-bill purchases could signal that policy makers are trying to get ahead of the potential turmoil.