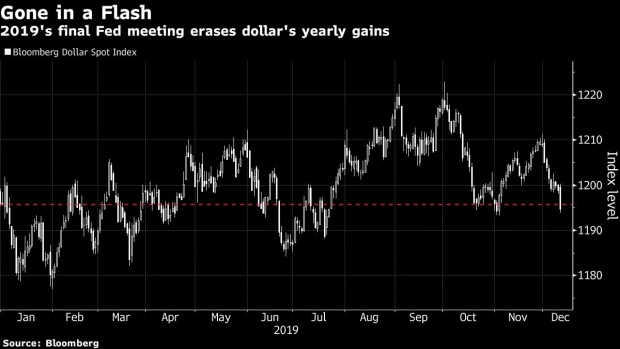 (Bloomberg) -- It wasn’t an interest-rate cut, but President Donald Trump got one item on his wish list from the Federal Reserve’s meeting: a weaker greenback.

The Bloomberg Dollar Spot Index erased its 2019 gains Wednesday after the central bank left rates unchanged, as widely expected, and lowered its forecasts to project no move through 2020.

Last week, Trump took to Twitter to bemoan the dollar’s strength and its effect on U.S. manufacturing, putting the blame squarely on Fed Chairman Jerome Powell. However, the Fed chief’s signal that some policy makers would be willing to let inflation run above the central bank’s 2% target was enough to puncture the dollar, according to Deutsche Bank AG.

“Powell notes a number of people wrote down overshoots of inflation under appropriate policy -- a nod towards shifting towards an inflation make-up strategy,” Deutsche chief international strategist Alan Ruskin said via email. That helps reinforce the “dollar-negative bias that the market clearly has.”

The Bloomberg greenback index sank 0.3% on the day, in its biggest drop since October. The gauge is now down about 0.1% this year. Treasury yields fell across the curve, with benchmark 10-year rates dropping roughly 5 basis points to 1.79%.

To contact the editors responsible for this story: Benjamin Purvis at bpurvis@bloomberg.net, Mark Tannenbaum, Greg Chang