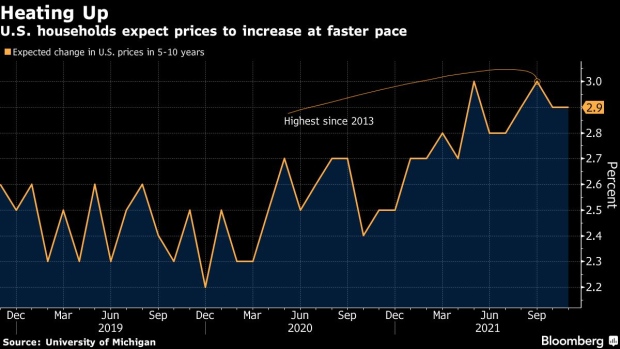 (Bloomberg) -- Regardless of whether it’s Jerome Powell or Lael Brainard running the Federal Reserve in February, the central bank risks finding itself in a bind of its own making.

The quickest consumer inflation since 1990 and the strongest price expectations among households in eight years are eroding the confidence of policy makers that inflation will cool in coming months as they once assumed.

But the challenge of 2022 will be if and when to raise rates from near zero. Markets are already pricing in a shift as soon as July while economists from Goldman Sachs Group Inc. to JPMorgan Chase & Co. have jettisoned calls for the central bank to stay on hold until 2023.

Complicating the decision-making and posing a challenge for communications is the much-hailed revamping of the central bank’s strategy in August and September 2020.

Chair Powell, Governor Brainard and colleagues agreed then it would “be appropriate” to keep borrowing costs ultra-low until maximum employment was reached, which they redefined as a “broad-based and inclusive goal.”

Officials made much fanfare of the wider scope of maximum employment, putting greater weight on gains across different demographic groups. There were public listening sessions and an admission that misplaced fears of inflation in the past may have stopped the labor market improving for millions of Americans, especially those earning the lowest incomes.

Back then they weren’t reckoning on the inflation surge now under way, which leaves them in a jam and facing accusations of being behind the curve or of fighting the last war.

A step away from the commitment to see wider gains in employment would spark questions about what the Fed is trying to achieve and ignite a backlash from progressive Democrats critical of the historical focus on prices. But letting inflation persist would potentially mean bigger rate hikes later, unwinding the gains in hiring that have been made in pushing unemployment below 5%.

“The hard part for the Fed here will be having to tamp down inflation and the risk of it becoming entrenched before they reach broad and inclusive full employment,” said Diane Swonk, chief economist at Grant Thornton LLP. “The framework was made for a slow-moving economy, not one that changed on a dime. ‘’

For the moment, the focus on the Fed is on who will lead it starting in February. Biden is choosing between Powell and Brainard with a decision expected before the Thanksgiving holiday on Thursday.

Both played a role in crafting the new strategy so whoever gets the four-year term will be responsible for squaring it with the central bank’s policy-setting.

Having said early on in the pandemic that he wanted to get back to the very strong indicators of 2019, Powell acknowledged Nov. 3 that the Fed’s goals are in tension.

He sounded as if had tempered his prior ambitions for a rapid and full labor market recovery. But he wasn’t specific about how he saw tradeoffs between the targets for inflation and jobs.

“There is still ground to cover to reach maximum employment,” Powell said at the Fed’s post-meeting press conference.

“We thought that schools re-opening and elapsing unemployment benefits would produce some sort of additional labor supply. That doesn’t seem to have been the case,” he said. “There’s room for a whole lot of humility here as we try to think about what maximum employment would be.”

Brainard, who doesn’t hold press conferences and speaks in more controlled formats than Powell, said in a September speech that she saw “no reason employment should not reach levels as strong or stronger than before the pandemic,” bucking data showing labor force participation has barely budged for more than a year.

She’s on alert over high inflation, but also has a view that structural forces could land the economy back into the low inflation slump once Covid-19 supply constraints subside.

Some of her colleagues aren’t so sure. Governor Christopher Waller said Friday that strong jobs data and worsening inflation readings have pushed him toward favoring a faster pace of asset runoff and quicker hikes next year. Vice Chair Richard Clarida also said it may be appropriate for policy makers to discuss next month whether to speed up the taper.

When Fed policy makers wrote down their forecasts in September they were evenly divided over whether to hike rates in 2022. The median forecast is almost certain to move in December to at least one hike next year.

From one angle, the job market looks robust: Employers have added a robust 582,000 jobs a month on average this year, which has pushed the national unemployment rate down to 4.6%.

But broader measures, including minority unemployment rates and participation rates for women age 25 to 54, show there is still slack -- and if previous recoveries are any guide it could take many more months to bring marginal workers back in.

One problem: The Fed’s policy framework doesn’t address how officials should balance risks between inflation and employment, an omission drawing criticism from economists such as Harvard University’s Jason Furman, who led former President Barack Obama’s Council of Economic Advisers.

“The Federal Reserve chair and others have failed to provide clarity about how the Fed would handle a situation in which the different indicators were sending different signals because they have essentially denied that such a situation was likely to happen,” Furman said in a paper released Thursday by the Peterson Institute for International Economics, where he’s a senior fellow. “But it is happening, in a big way, and additional clarity is needed.

At Bloomberg Economics, David Wilcox, the Fed’s former chief forecaster, says the central bank’s policy framework may be fuzzy enough to let it raise rates even before labor markets are tight across many demographics.

“It will be awkward for them to exercise an escape clause, no doubt about it, but an escape clause is there,” Wilcox said. “The statement says ‘and expects it will be appropriate’” to hold the funds rate at zero until maximum employment is achieved, he said.

“That is not a statement that the committee is going to hold at zero come hell or high water,” Wilcox said.