For a second day, Federal Reserve Chairman Jerome Powell defended the central bank’s stance to keep providing support to the U.S. economy even as inflation runs at uncomfortable levels.

“This is a shock going through the system associated with the reopening of the economy and it’s driven inflation well above 2 per cent, and of course we’re not comfortable with that,” Powell told the Senate Banking Committee Thursday.

The Fed chair called the price developments “unique” in history and said the central bank is closely watching to see whether its forecast that the high inflation will prove temporary is correct, or whether it threatens to be longer lasting.

“So we’re really trying to understand the base case and also the risks,” he said. 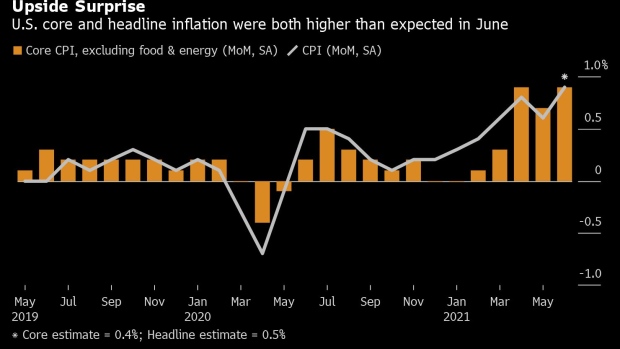 Powell said the surge in inflation so far had been concentrated in a limited number of areas, such as used car prices, and reiterated that he expects those increases to be transitory.

“To the extent that it’s temporary it wouldn’t make sense to react to it,” he said.

The Fed is currently buying US$120 billion of assets per month -- US$80 billion of Treasury securities and US$40 billion of mortgage backed debt – and has pledged to keep up that pace “until substantial further progress” has been made toward its goals of maximum employment and 2 per cent inflation.

Policymakers began to discuss the possibility of scaling back those purchases at their meeting last month and Powell said they’ll talk about it further at their next gathering on July 27-28.

While various policymakers have staked out differing positions on how soon that should occur, Powell repeated on Thursday that a decision to begin rolling back the program is still a ways off.

This was Powell’s second round of testimony this week on Capitol Hill. On Wednesday, he was peppered with questions about surging prices from lawmakers serving on the House Financial Services Committee.

Consumer prices soared in June by the most since 2008 and were up 5.4 per cent from the same month last year.

Powell’s remarks before Congress were his last semi-annual testimony before President Joe Biden decides whether to give him another four years at the Fed helm or pick someone else. Powell’s tenure as chair expires in February.

Two prominent Democratic Senate lawmakers -- committee Chair Sherrod Brown of Ohio and Elizabeth Warren of Massachusetts -- took Powell to task at the hearing for what they saw as a risky easing of bank regulation during his time atop the Fed.

The economy is recovering strongly from last year’s pandemic-driven swoon, with economists forecasting growth clocked in at a double-digit annualized pace in the second quarter.