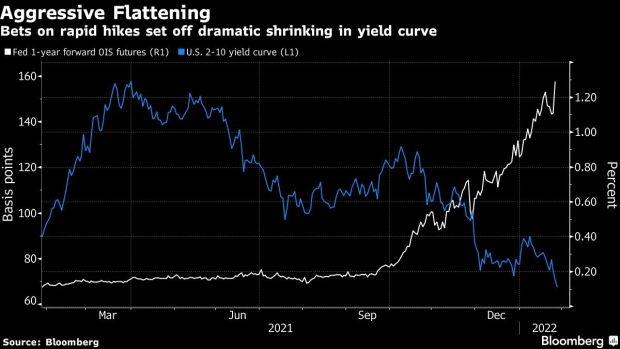 The way that yields spiked at the short end dramatically narrowed gaps across the Treasuries curve overnight, in what investors usually call a bear-flattening move. Such shifts signal that bonds are pricing in a potentially more aggressive tightening, enough to risk a rapid slowdown in the broader economy.

The yield curve shrank to the flattest since 2020 after Powell signaled a March hike and left the door open to rapid tightening after that. Longer-dated Treasuries actually rebounded on Thursday even as two-year notes extended their declines. The gap between two- and 10-year yields flattened for a third day to less than 67 basis points.

“It’s striking that rates markets reacted negatively to the Fed’s communications, given it was already pricing four rate hikes heading into the meeting, so that only serves to reinforce that the Fed chairman was indeed very hawkish,” said Andrew Ticehurst, a rates strategist for Nomura Inc.

”The bar for back-to-back hikes is relatively low, something we hadn’t been forecasting. This communication, including the decision not to end QE even sooner than March, combined with risk-off moves in markets, helps to explain the yield curve flattening.”

Powell said he wants to cool inflation running at a 39-year high without also derailing the recovery in U.S. employment, but the bond market is signaling that could be a very difficult challenge.

Jason England, a portfolio manager at Janus Henderson, said the Fed would be mindful of excessive flattening. “Should stickier-than-expected inflation lead to the market’s estimate on 2022 rate hikes being more on target (they’ve recently risen from 4 to 4.5, while the Fed projects only 3), the yield curve could flatten too much and even invert,” he wrote in a note.