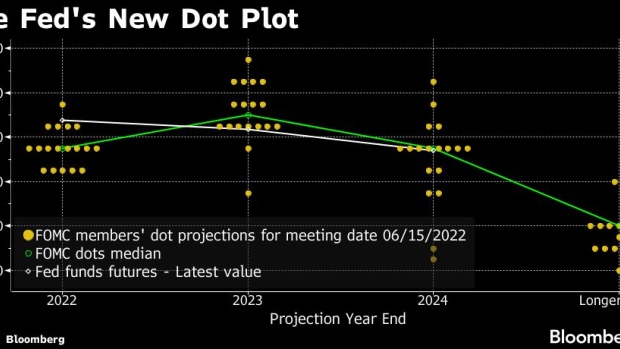 Jerome Powell, chairman of the U.S. Federal Reserve, speaks during a news conference following a Federal Open Market Committee (FOMC) meeting in Washington, D.C., US, on Wednesday, June 15, 2022. Federal Reserve officials raised their main interest rate by three-quarters of a percentage point and signaled they will keep hiking aggressively this year. , Bloomberg

(Bloomberg) -- Federal Reserve Chair Jerome Powell reiterated his determination to curb the hottest inflation in 40 years and said the US central bank’s commitment encourages the world to hold and transact in dollars.

“My colleagues and I are acutely focused on returning inflation to our 2% objective,” he said in welcoming remarks Friday to a Fed conference on the international role of the dollar in Washington. “The Federal Reserve’s strong commitment to our price-stability mandate contributes to the widespread confidence in the dollar as a store of value.”

His comments were the first in public since the Fed on Wednesday raised interest rates by 75 basis points in the largest increase since 1994 and signaled more aggressive moves to come as they fight the hottest inflation in four decades.

Powell told reporters at a post-meeting press conference that another 75 basis-point hike, or a 50 basis-point move, was likely at the next meeting of policy makers in July. Officials forecast rates will rise this year, to 3.4% by December and 3.8% by the end of 2023. That was a big upgrade from the 1.9% and 2.8% that they penciled in for their March projections.

The Fed chief, in his remarks on Friday, said the central bank’s ability to meet its goals for both maximum employment and stable prices depends on maintaining financial stability.

“The Fed’s commitment to both our dual mandate and financial stability encourages the international community to hold and use dollars,” he said.

He also highlighted the role played by the Fed’s liquidity swap lines and its standing repo facility for making it easier for foreign central banks to gain access to dollars in times of stress.

“Both facilities enhance the standing of the dollar as the dominant global currency,” he said.