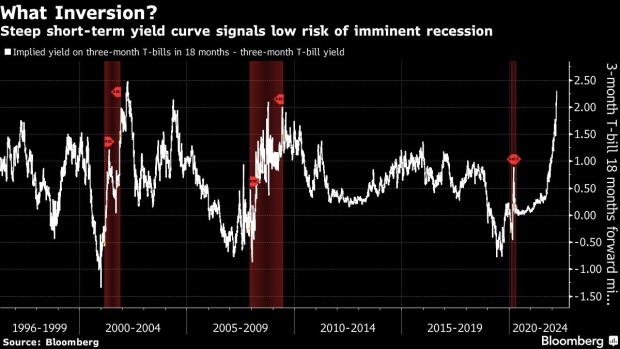 Jerome Powell, chairman of the U.S. Federal Reserve, during the National Association of Business Economics (NABE) economic policy conference in Washington, D.C, U.S., on Monday, March 21, 2022. The theme of this year's annual meeting is "Policy Options for Sustainable and Inclusive Growth." , Bloomberg

(Bloomberg) -- Federal Reserve Chair Jerome Powell on Monday weighed in on a major topic of debate in the bond market: where to look to determine the chances for a U.S. recession.

Some investors have been calling attention to a rapidly shrinking spread between two-year and 10-year Treasury yields to sound the alarm on a looming economic downturn. But Powell preferred a different measure of the yield curve that isn’t yet flashing a warning sign.

“Frankly,  there’s good research by staff in the Federal Reserve system that really says to look at the short -- the first 18 months -- of the yield curve,” Powell in response to a question at the National Association for Business Economics. “That’s really what has 100% of the explanatory power of the yield curve. It make sense. Because if it’s inverted, that means the Fed’s going to cut, which means the economy is weak.”

That slice of the curve, as measured by the spread between the current three-month Treasury bill rate and bets on where that will be in 18 months -- derived from the forwards market -- is now about 229 basis points, according to data compiled by Bloomberg.

The steepness of that spread marks a sharp contrast with the flattening -- or even inversion -- seen in other measures that have sparked concern about the potential for a looming recession.

The forward spread Monday was at its widest since 2002. That part of the yield curve inverted prior to all of the three most recent recessions.

The gauge reflects investors’ expectations of the Fed’s key borrowing costs over the next year or so. A negative spread suggests that traders are predicting the Fed will lower borrowing costs. And since policy makers in the past generally cut rates only when a recession was imminent, it would also suggest investors anticipate an economic downturn.

Eurodollar futures, for their part, are showing traders expect the Fed to be cutting rates by the end of 2024.

Read more: One Day After Fed Hike, Traders Betting Cuts Will Start in 2024

The gap between two- and 10-year yields now hovers at just under 20 basis points, down from as high as 92 basis points earlier this year.

Reading the two-to-10-year spread, it’s “hard to have some economic theory on why that would make sense,” with regard to predicting a recession, Powell said Monday. “We of course look at it. I wouldn’t say I don’t look at it. I do. But I tend to look at the shorter part of the yield curve. It’s just one of the many things we look at.”