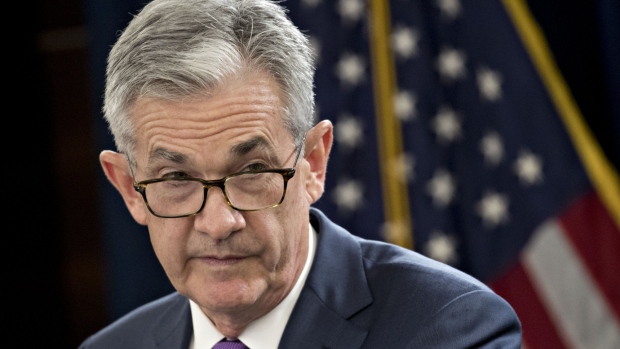 Federal Reserve Chairman Jerome Powell said the U.S. economy is strong but could face headwinds next year as policy makers weigh how far and fast to raise interest rates.

“We have to be thinking about how much further to raise rates, and the pace at which we will raise rates,” Powell said during a question and answers session Wednesday in Dallas moderated by Dallas Fed chief Robert Kaplan. The goal is to “extend the recovery, expansion, and to keep unemployment low, to keep inflation low.”

While generally upbeat about the U.S. economic outlook, Powell listed potential challenges including slowing demand abroad, fading fiscal stimulus and the lagged effect on the economy of the Fed’s eight rate increases since late 2015.

“These are things we are well aware of though. We know that when we’re making policy and we think about those and kind of have a sense of what they might be,” he said.

The chairman’s comments highlight the growing complexity the Fed faces as it sets policy and stays on course to hike interest rates for a fourth time this year in December. The central bank’s rate increases are starting to bind on some segments of the economy such as housing, and financial conditions are tightening. But the jobs market remains red-hot and inflation is at the Fed’s 2 per cent target.

“Powell tried to come across as neutral, in our view, which may be perceived as dovish by the markets,” said Sonia Meskin, an economist at Standard Chartered Bank. “He opted to try to calm the markets, at least from the Fed’s side.”

Treasuries were unchanged ahead of the European trading day, with yields suggesting Powell didn’t alter investor expectations. Ten-year yields were at 3.12 per cent as of 6:15 a.m. in London.

The U.S. expanded at a 3.5 per cent annual pace in the third quarter on the back of strong consumer spending, which has in turn been fueled by the lowest unemployment rate since 1969.

“I do believe our economy can grow and grow faster,” Powell said.

U.S. central bankers are pursuing a policy of gradualism, yet the higher rates have attracted the ire of President Donald Trump.

“We are absolutely committed to serving the public in a non-partisan, professional way, in a way that communicates what we’re doing and why we’re doing it as clearly as possible” Powell said.

He played down recent turbulence in the stock market. Though U.S. equity prices suffered their steepest loss last month since 2011, Powell said equity price moves were only one of many factors that the Fed takes into account.

The Fed chairman said officials are “looking really carefully” at how financial markets, the economy and business contacts are responding to rising rates.

“One of the key things he has done is try to shift away from the forecast and forward guidance,” said Michael Hanson, chief US macro strategist at TD Securities USA. He “is trying to be nimble as the data come in.”

The chairman also stressed that his move to press conferences following all eight of the Fed’s meetings in 2019 will help policy agility, and get markets away from the idea that the Fed only has the potential to change policy four times a year, lining up with the current press conference cycle.

"The markets definitely got in the habit of having us only move on press conference meetings,” Powell said. “Over time the market’s going to have to get used to that.”