Federal Reserve Chair Jerome Powell said officials can be patient on raising interest rates -- after announcing a start to reducing their bond purchases -- but won’t flinch from action if warranted by inflation.

“We think we can be patient. If a response is called for, we will not hesitate,” he told a news conference Wednesday after the Federal Open Market Committee said it would scale back by US$15 billion a month starting in November.

But Powell stressed that the tapering doesn’t mean policy makers will hike rates any time soon, emphasizing the desire to not hinder potential job gains ahead.

“We don’t think it is a good time to raise interest rates because we want to see the labor market heal further,” he said.

Following Powell’s remarks, the S&P 500, the Dow Jones Industrial Average, the Nasdaq 100 and the Russell 2000 closed at their all-time highs for a second straight session -- an accomplishment not seen since January 2018.

“I would describe it as a dovish tapering,” said Carl Tannenbaum, chief economist at Northern Trust. “He did not sound like someone who is nervous about raising interest rates sooner rather than later.”

The FOMC said it will reduce Treasury purchases by US$10 billion and mortgage-backed securities by US$5 billion, marking the beginning of the end of the program aimed at shielding the economy from COVID-19. Officials decided to maintain the target range for its benchmark policy rate at zero to 0.25 per cent. The decision was unanimous.

Powell said that the planned pace of tapering would put them on track to wrap the process up by mid-2022 but could be sped up or slowed down depending on the economic outlook.

The Fed has been buying US$80 billion of Treasuries and US$40 billion of MBS every month to help stimulate economic activity that was crushed in the initial pandemic lockdown and subsequent uneven recovery.

Central banks in developed economies globally are shifting their attention to the risk of inflation as supply-chain logjams spur shortages amid strong demand. The Fed’s preferred inflation measure was 4.4 per cent in the 12 months ending September, the highest in three decades and more than double the central bank’s target. Consumers’ expectations for prices climbed to 4.2 per cent in the same month, the highest in records going back to 2013.

Officials tweaked the language on inflation in their statement to reflect more uncertainty on how long it will last.

“Inflation is elevated, largely reflecting factors that are expected to be transitory,” officials said in the statement. “Supply and demand imbalances related to the pandemic and the reopening of the economy have contributed to sizable price increases in some sectors.” 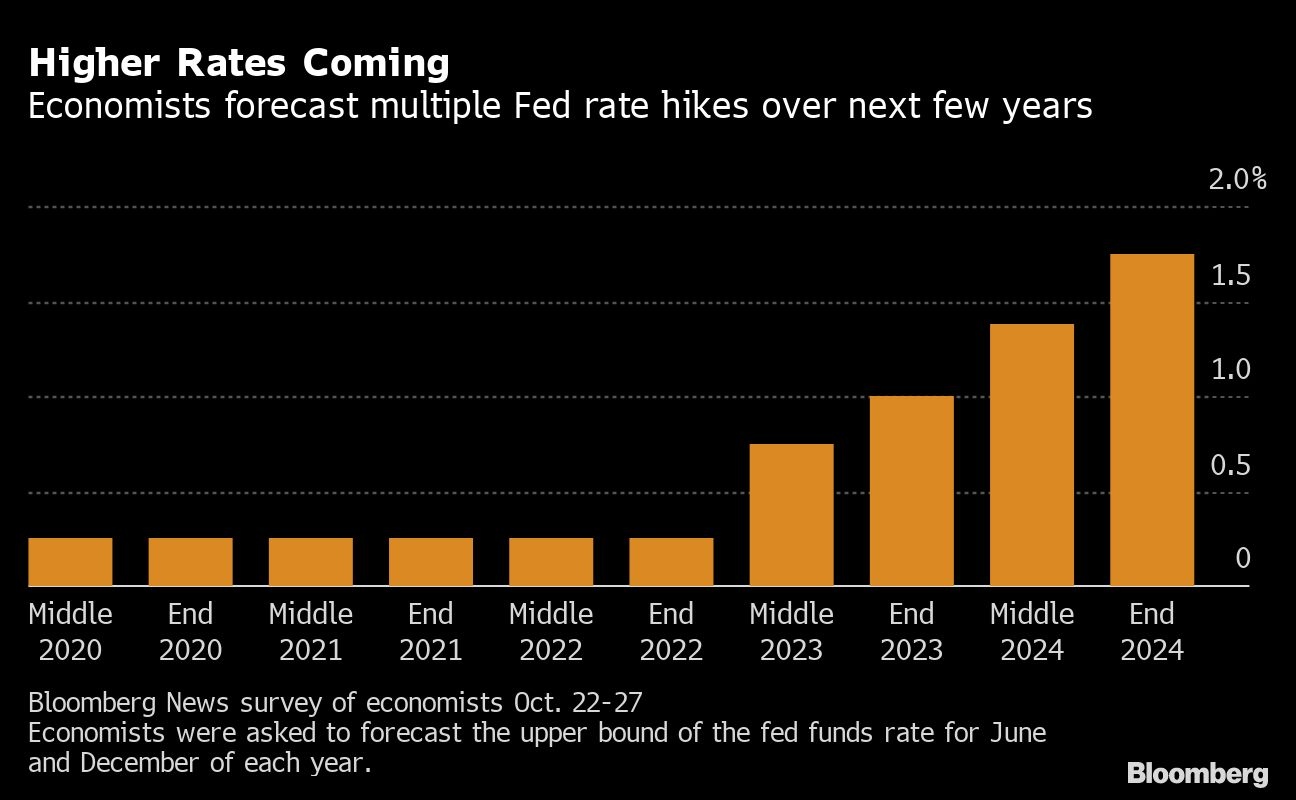 Powell told reporters that supply constraints have been larger and longer lasting than anticipated, but “like most forecasters we continue to believe that our dynamic economy will adjust to the supply and demand imbalances.”

He fielded several questions about elevated prices but declined to offer a more hawkish assessment of the risks -- beyond noting the high level of uncertainty and the commitment of central bankers to their goal for 2 per cent inflation over the longer term.

Investors widely expected the announcement on asset purchases at this meeting as Fed officials including Powell had signaled the move.

Powell’s term expires in February. He declined to comment on the nomination process. President Joe Biden said Tuesday he would announce his choice for chair and other openings “fairly quickly.”

What Bloomberg Economists Say...
“Policy makers appear to want to preserve the option to hike as soon as taper ends if inflation is elevated. However, completing the taper is a necessary, but insufficient condition for the rate liftoff.”

The renomination process has been complicated by an ethics scandal over unusual trading activity by some officials last year. Two regional Fed presidents stepped down following the revelations. Powell said he has briefed the Biden administration and lawmakers on the matter, as well as on steps the central bank has taken to tighten up the rules.

The pace of the taper clears the way for a possible interest-rate increase in the second half of 2022, with nine of 18 officials forecasting a move next year in their September outlook. Wednesday’s statement reiterated that rates will be held near zero until the economy achieves maximum employment.

Investors continue to see two quarter-point hikes in 2022 staring around mid year, according to pricing in interest-rate future markets.

Several measures of the labor market remain weaker than pre-pandemic levels, and policy makers are likely to intensify their debate over whether the period before COVID-19 hit offers the best benchmark for a workplace that has undergone tremendous change over the past two years.

“I don’t think we’re behind the curve. I feel policy is well positioned to address plausible outcomes,” Powell said.