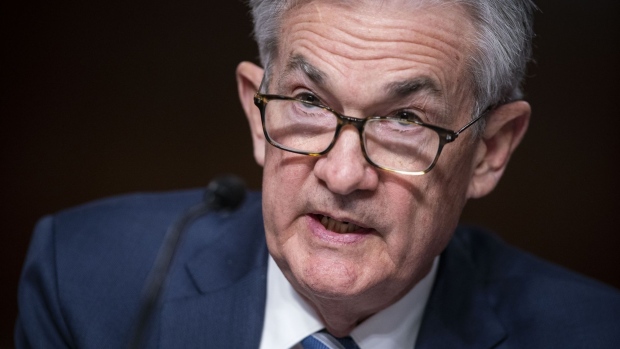 Jerome Powell, chairman of the U.S. Federal Reserve, speaks during a Senate Banking, Housing and Urban Affairs Committee hearing in Washington, D.C., U.S., on Tuesday, Nov. 30, 2021. The Federal Reserve chair, in his first public remarks on the omicron variant of the coronavirus, said it poses risks to both sides of the central bank's mandate to achieve stable prices and maximum employment. , Bloomberg

“Most FOMC participants agree that labor market conditions are consistent with maximum employment in the sense of the highest level of employment that is consistent with price stability,” Powell said on a conference call with reporters following the FOMC meeting. “And that is my personal view.”

The Fed is tasked with a dual mandate of achieving both price stability and maximum employment. For months now, prices have been rising well above the Fed’s 2% target rate, but central bankers have held off on removing policy support in order to give the labor market more time to recover.

In December, Powell said that it would keep rates near zero until “labor market conditions have reached levels consistent with the Committee’s assessments of maximum employment.” He, along with some of his colleagues, have said repeatedly that they’re seeking a “broad-based and inclusive” labor market recovery.

On Wednesday, Powell said the central bank was ready to raise interest rates in March. The Fed also said it would shrink its bond holdings after liftoff has begun, moving toward ending ultra-easy pandemic support to fight the hottest inflation in a generation.

While the Fed hasn’t explicitly spelled out how it defines maximum employment, current labor market data suggest that the measurement is based on broad statistics rather than individual demographic categories.

Nationally, the unemployment rate has been falling for six straight months, job openings are near a record high and more than 6 million jobs were added in 2021 alone. Overall, the U.S. has recovered nearly 85% of the jobs lost at the beginning of the pandemic.

The unemployment rate for Black Americans is more than double that of White Americans, and it rose in December while the rates for other major demographic groups declined. Unemployment rates among Black, Hispanic and Asian Americans are higher than the rate for Whites.

With inflation taking over the conversation among both policymakers and central bankers, prioritizing those employment disparities will prove difficult in the coming months as monetary policy becomes less accommodative.