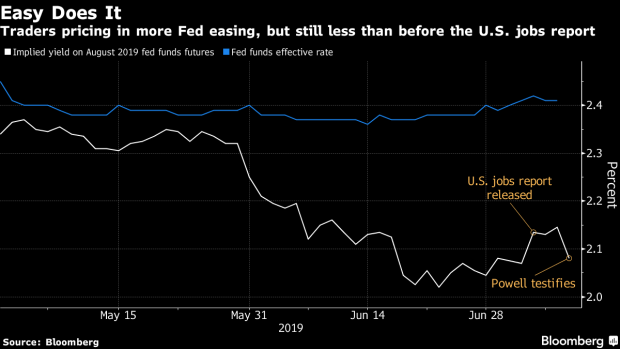 (Bloomberg) -- Nothing seems likely to stop Jerome Powell from cutting interest rates later this month. Not the regional Fed presidents who want to wait, not the strongest labor market in decades, and certainly not the political shadows that hang over such a move.

Now traders are asking: If Powell is so worried about the outlook for economic growth, could he cut rates even more than the quarter-point the market has priced in?

“If the economy is really slowing down, and you are hit by shocks that could tip you over,” a quarter-point cut “is not a defensible move,” said Seth Carpenter, chief US economist at UBS Securities Inc in New York. “They are shifting from data dependence to risk management.”

Powell said the U.S. economy is facing risks from flagging business sentiment, a global slowdown in manufacturing, and an inflation rate that has remained persistently low. He was speaking in testimony before the House Financial Services Committee on Wednesday.

Traders expect a cut of at least a quarter-point at the end of this month, and they dialed up bets on a bigger one after Powell’s comments. The market is now pricing in almost three-quarters of a point of easing by the end of 2019, and short-dated Treasury rates have fallen sharply, taking the two-year yield as low as 1.82%. The dollar also weakened, while U.S. stocks touched record highs.

“He seemed to encourage investors to expect a rate cut,’’ Roberto Perli, a partner at Cornerstone Macro LLC, said in a note to clients, while leaving the possibility of a half-point cut “wide open.’’

The Fed’s biggest policy dove said there’s no need for such an aggressive move.

“I would argue for a 25 basis point cut at the next meeting,” St. Louis Fed President James Bullard told reporters later on Wednesday. “I don’t like to prejudge the meeting too much, but if the meeting were today or tomorrow that is what I would be recommending.’’ Bullard dissented in favor of a rate cut last month.

The White House is exerting heavy pressure on the Fed to ease policy. President Donald Trump has repeatedly slammed Powell for keeping rates too high, and explored ways to replace him as Fed chair.

Powell told Congress he intends to serve a full four-year term, and wouldn’t stand down even if Trump attempts to get rid of him. And he sought to play down the politics surrounding the Fed.

Asked if positive or negative comments about the Fed “impeded’’ its ability to implement policy, Powell responded: “We will always focus on doing the job you have assigned us and we will always do it to the best of our ability.’’

Some of the most pointed questions on monetary policy came from Rep. Carolyn Maloney, a New York Democrat. Maloney said she didn’t see the case for a half-point cut, and she asked Powell if the June jobs report, which showed employers added 224,000 jobs, had changed his outlook on whether lower rates are needed.

“The straight answer to your question is no,’’ Powell said. “The bottom line for me is that the uncertainties around global growth and trade continue to weigh on the outlook,’’ while inflation remains “muted.’’

Regional Fed presidents in Richmond, Dallas, Philadelphia and Cleveland have all cast doubt on the need to cut interest rates at all.

“I prefer to gather more information before considering a change in our monetary policy stance,’’ Cleveland Fed President Loretta Mester said July 2 in London. Mester is not a policy voter this year.

A half-point cut could be a risky move. It might suggest to investors that there is some emergency afoot that they don’t yet see. It would also, no matter what Powell says, have political overtones.

“I don’t think it is a likelihood,’’ said Julia Coronado, president and founder of Macropolicy Perspectives in New York. She said Powell’s strategy is a “methodical recalibration, rather than an emergency or breaking out the big guns.’’

--With assistance from Emily Barrett.

To contact the reporter on this story: Craig Torres in Washington at ctorres3@bloomberg.net

To contact the editors responsible for this story: Alister Bull at abull7@bloomberg.net, Ben Holland