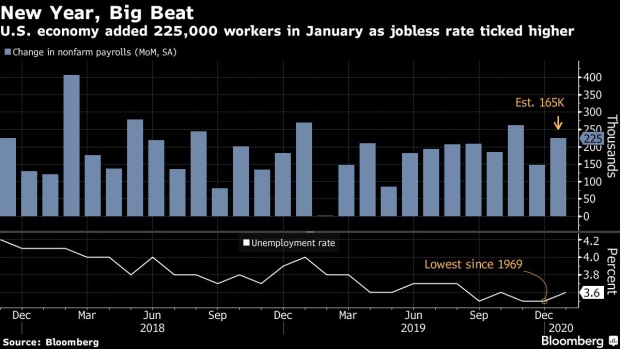 (Bloomberg) -- Federal Reserve Chairman Jerome Powell has confessed that it’s “very hard” to understand China’s economy. The outbreak of the coronavirus has made that exponentially more difficult.Yet it’s something that he can hardly afford to ignore when he adddresses lawmakers this week. The sheer size of China’s economy means that any hit to its growth from the epidemic will have a knock-on impact for the rest of the world and the U.S.“The effects of the coronavirus in China have presented a new risk to the outlook,” the U.S. central bank wrote in its semi-annual report to Congress released on Friday.Just how big of a risk it is -- and what’s the likely Fed response -- probably will be front and center when Powell kicks off two days of Congressional testimony on Tuesday before the House Financial Services Committtee. He speaks to the Senate Banking panel the next day.

Lawmakers will also likely press Powell for the rationale behind the big run-up in the Fed’s balance sheet that’s occurred since September’s turmoil in the money markets.Coming on the heels of President Donald Trump’s acquittal on impeachment charges last week and ahead of November elections, the hearings could well be politically contentious as lawmakers from both parties pepper Powell with questions.“He is going to have his Kevlar on,” said Ward McCarthy, chief financial economist at Jefferies LLC. “All of the questions will have some political connotations.”Ahead of the hearings, traders in the federal funds futures market are betting that Powell and his colleagues will respond to the virus with a cut in interest rates later this year.

Given all the unknowns involved, Fed watchers say Powell is unlikely to be that clear about the Fed’s intentions. But he’s just as unlikely to dismiss the threat and rule out any response.“There’s little upside to trying to sound too confident,” said former Fed researcher Michael Feroli, who is now chief U.S. economist at JPMorgan Chase & Co. “At least when I was there, there weren’t any virologists on the board.”

“The underlying hiring trend is robust, providing a sturdy foundation for domestic growth. However, this is due to be challenged in the relatively near term by weak global growth in general and coronavirus supply-chain disruptions in particular.”

The uncertainties are compounded by the difficulties outside observers confront when trying to understand China’s economy through the prism of what many see as doctored government statistics.“You can read all you want, you can visit it all the time, but nonetheless it’s still very hard, I think, for me anyway, to really feel like you understand how the economy works,” Powell told lawmakers in November.Private sector economists have started to shave their estimates of U.S. growth due to the coronavirus. Feroli cut his first-quarter forecast to 1%, though he expects activity to bounce back in the second quarter.Oxford Economics is more pessimistic. It reduced its first-quarter growth prediction to 0.6% from 1% with some spillover into the second quarter.The virus outbreak occurs against a backdrop of what is mostly a healthy U.S. economy. U.S. employers boosted payrolls by a higher-than-expected 225,000 in January as wage gains also rebounded.

The global outlook also appears a bit brighter thanks in part to the U.S.-China phase one trade deal and fading of fears of a disruptive, no-deal Brexit.What’s more, the turbulence in the money markets has also subsided, thanks to hundreds of billions of dollars the Fed pumped into the financial system.

In a Feb. 6 letter to Powell, Democrat Senators pressed him for an explanation of what lay behind last year’s agitation in the money markets and the Fed’s response.The lawmakers, including presidential candidate Elizabeth Warren, raised questions about whether the banks had gamed the market in hopes of winning some regulatory relief.Powell, for his part, has depicted the money market interventions as a success.He’s also sounded satisfied with the stance of monetary policy, after three interest rate cuts last year. And he’s suggested that he’s likely to stay that way unless there’s a material change to the outlook for the U.S. economy.Whether the coronavirus will eventually force such a reassessment is unclear at this point.“The set of possible outcomes is pretty broad right now,” said Nathan Sheets, a former Fed official who is now chief economist for PGIM Fixed Income.

--With assistance from Christopher Condon and Craig Torres.

To contact the reporters on this story: Rich Miller in Washington at rmiller28@bloomberg.net;Steve Matthews in Atlanta at smatthews@bloomberg.net

To contact the editors responsible for this story: Margaret Collins at mcollins45@bloomberg.net, Alister Bull, Sarah McGregor