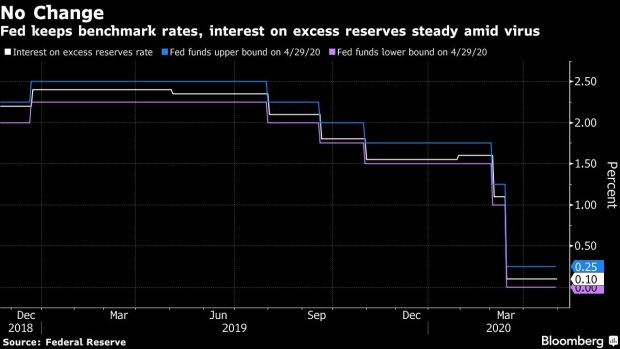 (Bloomberg) -- Federal Reserve Chairman Jerome Powell voiced concern that the coronavirus crisis could leave permanent scars on the U.S. economy and said policy makers of all stripes needed to do more to limit the damage.

In a sober 48-minute teleconference with reporters after the Fed left interest rates pinned near zero, Powell suggested that the economic battle against the virus would be far from over even if the economy begins to recover in the third quarter from its deepest dive since the Great Depression.

The ongoing public health crisis “poses considerable risks to the economic outlook over the medium term,” Fed policy makers said in a statement on Wednesday after two days of talks.

The central bank’s somber assessment contrasted with hopes for a rapid rebound among stock market investors and President Donald Trump and indicates that the Fed could keep the federal funds rate at rock bottom levels for years.

“My estimate is that the funds rate will be at zero for five years,” said Jonathan Wright, economics professor at Johns Hopkins University in Baltimore and a former Fed economist. “The economy cannot be easily restarted and it is going to be a very long slog to get the economy back on its old trajectory.”

In perhaps a sign of how concerned he is, Powell set aside his usual reticence about commenting on fiscal policy and urged lawmakers to come up with further measures to support the economy. He also played down worries -- primarily voiced by Republican lawmakers -- about the impact the government spending was having on the nation’s debt.

“This is not the time to act on those concerns,” said the Fed chief. “This is the time to use the great fiscal power of the U.S.”

Powell, who served in the Republican administration of George H.W. Bush, was picked to run the central bank by Trump but was initially appointed to its Board of Governors by the president’s predecessor, Barack Obama.

Congress has already enacted a series of aid packages, including $2.2 trillion to support households and businesses to cope with the crisis.

While saying that the Fed was prepared to use all its tools to help the economy, Powell did not spell out any new steps at his press conference even as he stressed the difficulties ahead.

“Overall they wanted to send a dovish message even though there were no new actions to speak of today,” said Jim O’Sullivan, chief U.S. macro strategist at TD Securities.

Powell repeatedly called the stance of monetary “appropriate,” noting that the Fed has promised to keep rates near zero until it is confident that the economy has weathered the coronavirus crisis and is on track to achieve the central bank’s goals of maximum employment and price stability. He hinted that forward guidance might be made more specific at a future Fed meeting without saying how or when.

“We’re not going to be in any hurry” to raise rates, he said.

With financial backing from the Treasury, the Fed has also put forward nine emergency financing facilities to provide up to $2.3 trillion throughout the economy, which will deliver help to big and small businesses, state and local governments and even some risky corners of the financial markets.

Only four of the facilities are operational. Powell said the Fed would soon publish the terms governing its $600 billion Main Street Lending Program, though he suggested that it could be later expanded beyond that. The facility, which is backed by $75 billion from the Treasury, is aimed at providing help for small and medium-sized businesses.

As well as the possibility of beefing up some of the programs if needed, Powell also left open the possibility they could be extended, with several currently scheduled to expire on Sept. 30.

“Our credit facilities are wide open,” he said. “We can do more on that front.”

Powell though did stress that there are limits to what the Fed can do under the law. It can’t hand out grants to businesses struggling to survive, for instance.

“We’re going places and providing help in places where we never have and I’m glad that we are,” Powell said. “Nonetheless these are lending powers” not spending ones.

The Fed chairman spent a good portion of the press conference laying out the economic devastation caused by the efforts to contain the spread of the virus. While economic activity may soon begin to pick up, it will take some time before the U.S. is back to where it was pre-crisis, he said.

“I think everyone is suffering here but I think those who are least able to bear it are the ones who are losing their jobs,” Powell said. “It is heartbreaking to see all that threatened right now.”

He also highlighted the potential for longer-term damage to the economy as firms are forced out of business and workers lose their jobs and drop out of the labor force.“The Fed is hunkering down for a long fight, not just against Covid-19 but also against its after effects, which are likely to last for a protracted period of time,” Roberto Perli, a former Fed official who is now a partner at Cornerstone Macro LLC, said in an email to clients.