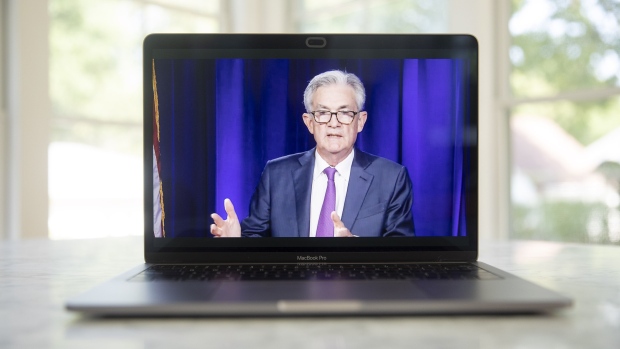 Jerome Powell, chairman of the U.S. Federal Reserve, speaks during a virtual news conference seen on a laptop computer in Tiskilwa, Illinois, U.S., on Wednesday, Sept. 16, 2020. The Federal Reserve left interest rates near zero and signaled it would hold them there through at least 2023 to help the U.S. economy recover from the coronavirus pandemic. Photographer: Daniel Acker/Bloomberg , Bloomberg

In one of his strongest appeals to date, Federal Reserve Chair Jerome Powell warned of a weak U.S. recovery without sufficient government aid and said providing too much stimulus wouldn’t be a problem.

Powell’s remarks Tuesday were followed a few hours later by President Donald Trump telling his negotiators to halt talks. Republicans’ opposition to a larger relief package has kept discussions with Democrats at a stalemate in Congress since aid to jobless Americans and small businesses expired in July and August.

“Too little support would lead to a weak recovery, creating unnecessary hardship for households and businesses,” Powell told a virtual conference hosted by the National Association for Business Economics. “By contrast, the risks of overdoing it seem, for now, to be smaller. Even if policy actions ultimately prove to be greater than needed, they will not go to waste.”

Powell and his colleagues at the U.S. central bank cut their benchmark interest rate to near zero in March at the onset of the coronavirus pandemic. They’ve pledged to keep rates low until the economy returns to maximum employment and have been urging Congress to pass additional fiscal stimulus on top of the roughly US$3 trillion already authorized to keep the outlook for continued economic recovery intact.

Philadelphia Fed chief Patrick Harker, in separate remarks, said at least another US$1 trillion was important to sustaining the recovery. “We really could use that additional fiscal stimulus to get through this period,” he told a webinar hosted by the Global Interdependence Center.

Lawmakers have been debating additional aid since the end of July, when the enhanced unemployment benefits that were authorized in March expired, but have so far failed to come to an agreement. Democrats have been pushing for a bigger spending package while Republicans want a smaller one; Powell didn’t explicitly reference either party’s position in his prepared remarks.

“The recovery will be stronger and move faster if monetary policy and fiscal policy continue to work side by side to provide support to the economy until it is clearly out of the woods,” Powell said.

Meanwhile, coronavirus cases are on the rise across the country again, posing a renewed threat to the economy -- a risk Powell alluded to in his remarks. His comments echoed those of his European Central Bank counterpart, Christine Lagarde, who warned in an interview published Tuesday against governments winding down aid amid ongoing outbreaks.

“Consumption held up well through August after the expiration of expanded unemployment insurance benefits, indicating that savings from transfer payments continue to support economic activity,” Powell said. “Still, since it appears that many will undergo extended periods of unemployment, there is likely to be a need for further support.”

Fed officials recently announced they would redefine their 2 per cent inflation target as something to achieve on average over time, which means allowing inflation to rise above the target following periods like the present where it runs below the target. The Fed’s preferred measure of inflation showed prices rose 1.4 per cent in the year through August.

“Declining inflation has been a persistent factor for some time,” Powell said while answering questions after the speech. “We are still seeing downward pressure on inflation, and I think it’s appropriate for central banks, and certainly the Fed, to take that into account and move to a framework that is robust to that.”