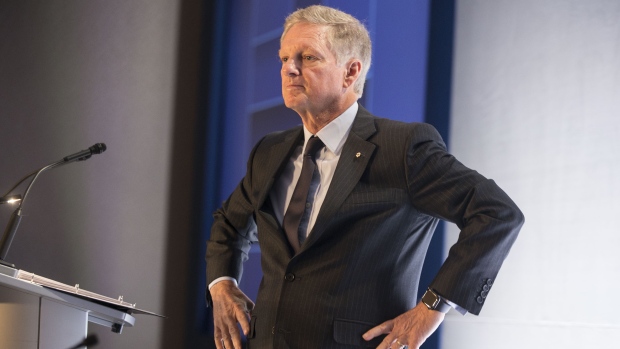 Power Corporation's Chairman and Co-CEO Paul Desmarais Jr. waits for the start of the company's annual meeting in Toronto on Tuesday, May 14, 2019. , THE CANADIAN PRESS/Chris Young

TORONTO -- Shareholders of Power Corp of Canada (POW.TO) voted down a say-on-pay proposal at the company's annual general meeting Tuesday after company leadership came out strongly against it.

The vote for a greater shareholder voice on executive compensation came out as 23.3 per cent in favour and 76.7 per cent against at the meeting in Toronto.

Shareholders voted down the proposal even as an initiative by the federal government could see it imposed. The most recent budget included a provision, still to be legislated, that would require a non-binding shareholder vote on pay at every annual meeting.

He said there's no clear end as to what shareholders could be given a say in once the trend begins.

If shareholders object to how the company is run, they can also cast a vote by selling their shares, something fewer than expected did during a recent share buyback, said Desmarais.

The Montreal-based financial services and investment company said earlier Tuesday that its profit for participating shareholders fell to $292 million in the first quarter, from $525 million in the year-earlier period when it recorded gains from the sales of some investments.

The company said net earnings for the quarter ended March 31 amounted to 63 cents per share, down from $1.13 per share in the 2018 first quarter.

The biggest decline, however, was at the segment that includes Sagard Investment Funds, where net income dropped to $11 million from $227 million in last year's first quarter.

"As we've said many times, our earnings from the Sagard Investment Funds and other investments are volatile in nature, as they depend on many factors including timing of the realizations."

Power Corp. also announced a six per cent increase in its quarterly dividend for participating preferred shares and subordinate voting shares. The payout will rise to 40.5 cents from 38.20 cents per share.

The company continues to be the majority shareholder in Power Financial Corp., but it's stake has fallen to 64.1 per cent from 65.5 per cent.