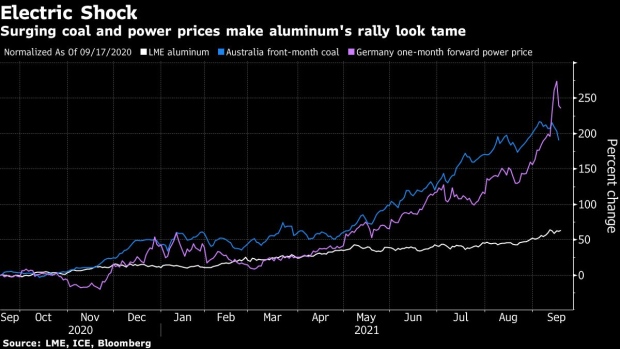 A worker controls a crucible as it pours molten aluminium into a smelter on the large aluminum slabs production line in the foundry at the Sayanogorsk Aluminium Smelter, operated by United Co. Rusal, in Sayanogorsk, Russia, on Wednesday, May 26, 2021. United Co. Rusal International PJSC’s parent said the company has produced aluminum with the lowest carbon footprint as the race for cleaner sources of the metal intensifies. Photographer: Andrey Rudakov/Bloomberg , Bloomberg

(Bloomberg) -- Surging energy costs are adding to pressure on global aluminum supply at a time when demand for the metal used in everything from cars to beer cans has already driven prices to a 13-year high.

Just weeks ago, it looked like aluminum’s blistering rally might spark a worldwide rush to reopen mothballed smelters. However, the industry is massively energy intensive. The spike in global electricity and coal prices will make restarts increasingly difficult and some producers may also soon be struggling to run their existing smelters profitably if the energy crunch worsens, particularly those not locked into long-term power contracts.

Aluminum has nearly doubled over the past 18 months in a rally that’s transformed the fortunes of a long-struggling industry. With demand booming and production under pressure in top supplier China, buyers were already bracing for a new era of scarcity and higher costs. Now, the recent surge in energy costs could underpin aluminum’s recent gains and help drive prices even higher.

Citigroup Inc. estimates that the highest-cost smelters in Europe might be running at production costs of as much as $2,900 a ton after the spike in energy prices. Aluminum was trading at $2,869 a ton on the London Metal Exchange on Monday.

“I see very limited restarts,” Tracy Liao, an analyst at Citigroup, said by phone from Hong Kong. “Smelter margins were at decade highs in some places, and even then we didn’t see much material discussion on restarts of idled smelters -- and now with power prices increasing, it’s even less likely.”

And with Europe’s energy crunch set to worsen over winter, there’s also an outside risk that aluminum smelters could be knocked offline if industrial blackouts take hold. Production in China is already faltering due to seasonal power constraints, and any further outages there or elsewhere risk sending prices rocketing higher and exacerbating shortages of metal that are appearing worldwide.

“If the power shortages get further extended, then obviously aluminum smelters will be suffering from either big cost inflation, or forced shutdowns if necessary -- but at this moment this is not our base case” Liao said. “The cost inflation argument is more material, but either way the risk skew is to the upside for aluminum prices.”