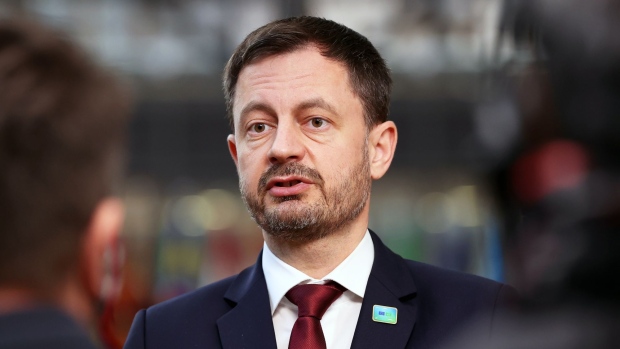 Eduard Heger, Slovakia's prime minister, speaks to members of the media at the European Union-Africa Union Summit in Brussels, Belgium, on Thursday, Feb. 17, 2022. Brussels welcomes about 40 African leaders for the first time in eight years, aiming to reset European relations with the continent as it vies with China for influence. , Anadalou

(Bloomberg) -- Slovakia may cut electricity exports to Germany and other European Union states unless the bloc’s governments meet its demand to modify an emergency energy proposal, the country’s premier said.

EU member states are set to clinch a deal on the unprecedented package to intervene in the energy market at a ministerial meeting on Friday in Brussels. It includes a cap on lower-cost power producers’ revenue from electricity that Slovakia argues isn’t fit for its national power industry.

“We will be forced to use our domestic electricity production for our economy first, to protect it,” Slovak Prime Minister Eduard Heger said in an interview in Bratislava on Tuesday.

The EU’s 27 members are grappling with soaring energy prices in a crisis triggered by Russia’s severing gas supplies to Europe following Moscow’s invasion of Ukraine. Governments are under mounting pressure to help consumers and businesses limit the impact of the energy crunch before the northern winter heating season begins, or risk turmoil and social upheaval.

Heger said that the proposed revenue cap of 180 euro ($173) per megawatt hour means his country will receive very limited funding, which is then to be channeled to households and companies to curb the impact of the crisis. Slovak producers have already sold most of their 2023 electricity production below that threshold, he said, making the cap ineffectual.

Slovakia’s main generator, Slovenske Elektrarne AS, exports electricity mainly to Germany, the Czech Republic and Hungary. The company may confront an “unbearable financial burden” because of government plans to nationalize utilities in an emergency, Enel SpA, a shareholder of the generator, said.

Nationalization plans approved this week by the Slovak parliament would mean “the inability to fulfill existing loans and contracts and therefore the concrete risk of insolvency and bankruptcy,” Enel said in a statement.

The EU’s emergency package requires a weighted majority support from national governments to enter into force, meaning no single country can torpedo it with a veto.

EU nations are zeroing in on the proposal after the Czech Republic, which holds the EU rotating presidency, proposed a set of amendments to boost governments’ flexibility on how to implement the measures, according to EU diplomats.

Heger said he’ll propose redistributing revenue from the cap among all member states. Another solution could be to allow Slovakia to use EU cohesion funds to pay compensation to households and businesses.