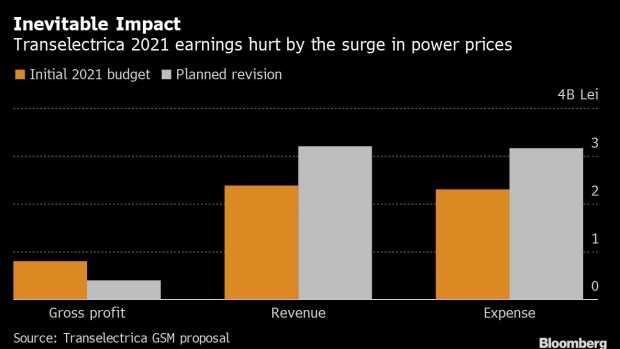 (Bloomberg) -- The recent surge in power prices prompted Transelectrica, Romania’s state-owned power grid operator, to cut in half its profit estimate for this year as expenses rise.

After energy prices rose by more than 20% in Romania this year, Transelectrica asked its shareholders to approve a revision of this year’s budget as expenses are poised to increase by almost 38%, prompting a cut in its gross profit estimate to 41 million lei ($9.7 million) from a previous estimate of 81 million, according to a statement on its website. Shareholders are expected to vote on the budget revision on Oct. 21.

Transelectrica also plans to invest about 3.7 billion lei this year, mostly in upgrading its power grid network. It will use loans, European Union funds and its own resources to finance the planned investments.

“In our funding mix, banking loans or/and corporate bonds will represent 23% of the total sources, the EU funds 22% and the difference of 55% will be covered from own sources,” the company said.