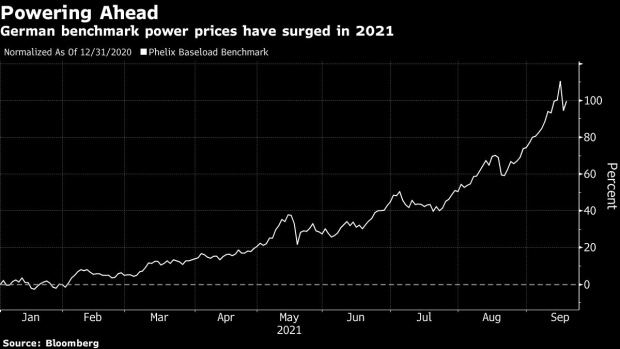 Rocketing European power prices should be manageable for consumers and company margins at this stage, but pose risks if they persist, Barclays Plc said.

The industries most exposed to higher power prices are transport, metals and mining, electricity generation and materials, strategist Emmanuel Cau wrote in a note to clients. The broker’s utilities analysts earlier this week said the less-regulated northern European stocks in the sector could be potential beneficiaries.

“Although it is likely that many have hedges in place to smooth out short-term fluctuations in costs, thus making their businesses and the prices they charge customers more manageable, the longer prices stay high, the more impact will be felt as hedges will start to roll off,” Cau said.

This could ultimately hit margins and lead to higher prices for customers, again “adding to the inflationary mix given companies’ recent success in passing on input costs,” he said. Barclays strategists keep a relative preference for the energy sector over utilities as an inflation hedge.

A surge in power prices to record levels spooked investors at the start of the week. This abated somewhat on Thursday, but the gains have resumed on Friday with no signs of improved supplies ahead of the winter.

For consumers, rising energy and food prices may dent confidence, but the impact of surging power prices on inflation should moderate in the first half of 2022 as it starts to lap tougher comparables, Barclays said.

“Furthermore, consumers are currently in a relatively healthy financial position” thanks to excess savings accrued during the pandemic, strong labor demand and because they haven’t had to deal with housing or wealth impairments during this recession, Cau said.

However, the squeeze that inflation is putting on income “will certainly not be helpful, and could eventually lead to wage discussions,” Cau said. This could mean that other governments step in to try to help consumers deal with the rise in energy prices, as seen this week in Spain and Italy. The measures in Spain have hit shares in domestic utilities hard in recent days.