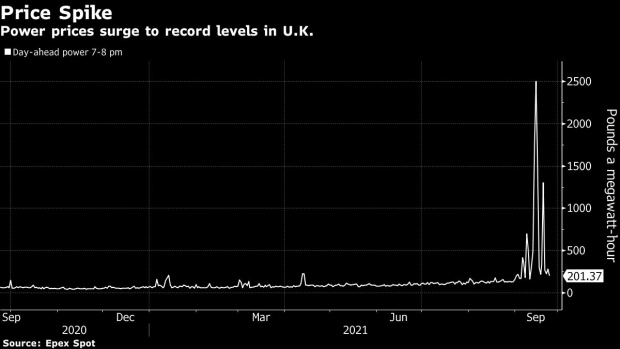 The U.K. -- where some electricity suppliers have gone out of business amid record power and gas prices -- is getting an energy lifeline just in time for winter.

On Oct. 1, commercial flows will start on the 450-mile (724-kilometer) North Sea Link, the world’s longest sub-sea power cable, connecting British and Nordic power markets for the first time. Supply will initially be limited to about half of its 1,400-megawatt capacity, with plans to gradually increase to full output by the start of next year.

While high prices are creating an energy crisis across Europe, the U.K.’s risk of blackouts increased earlier this month after a fire took out a key electricity link with France. Since then, some small retailers have exited the market. The government says there won’t be shortages, but supplies are now so scarce that any further mishaps or unexpected plant outages could mean the lights go out.

Interconnectors are seen as a vital way to access power from countries with different natural resources. Power flows to the market with higher prices, in this case the U.K.

“It is likely that in the short term, adding the North Sea Link will help mitigate some of these events,” said Rajiv Gogna, a partner who specializes in energy issues at consultancy Lane Clark & Peacock LLP. “As winter approaches, demand will increase.”

A large part of the soaring electricity cost is down to record-high gas prices as storage levels stay critically low in Europe. Gas will continue to influence power prices this winter, Gogna said.

For Norway, the timing is less fortuitous, with a dry summer causing a huge deficit in its usually plentiful hydropower resources. Low reservoirs at home will limit producers’ ability to export power to the U.K. and mainland Europe to just over a third of maximum capacity this winter, according to Olav Johan Botnen, a senior analyst at Volue Insight AS.

“Almost all of that export will go to the U.K. this winter, as we expect prices there to be higher than in the rest of Europe,” Botnen said. “Under a normal hydrological situation, we would of course see full export flows to both the U.K. and the continent with these price levels.”

Norway is already connected with sub-sea cables to Germany, the Netherlands and Denmark. Through its vast hydroelectric resources, it became the biggest net exporter of power in Europe during the second half of last year.

However, tempted by high power prices in Europe this summer, Norwegian hydro producers exported more electricity than usual, while less rain than normal curbed inflows to reservoirs. That left the Nordic region with a 22 terrawatt-hour deficit, according to Volue Insight data.

With plans to electrify everything from its oil platforms to its power-intensive on-shore industry, Norway’s power surplus is set to shrink to half by 2030, according to grid manager Statnett SF.

“We must secure access to the U.K. market for the times when we would like to export power and secure imports for times when we want to import,” said Statnett Chief Executive Officer Hilde Tonne. “For the society as a whole, these cables are very profitable for Norway.”

Even with reduced capacity, the interconnector can still help the U.K. tackle its extreme pricing events. Recent tests on the cable have shown it can alleviate or exacerbate the pricing situation, depending on the direction of test flows.

Norway has put all future interconnector projects on hold until it has evaluated the full impact of the North Sea Link. The moratorium includes both a merchant cable to Scotland and National Grid Plc’s plans to link wind farms in the North Sea with both countries.