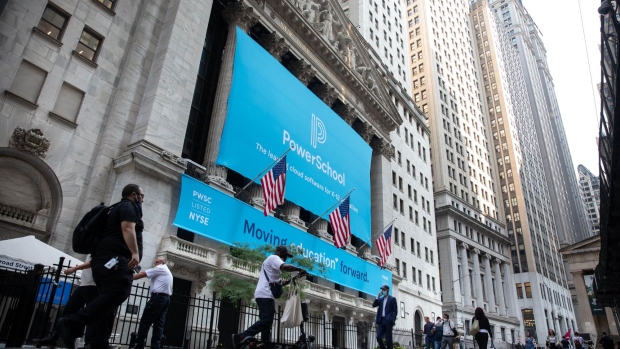 (Bloomberg) -- Education software provider PowerSchool Holdings Inc. was little changed in its trading debut after a $711 million initial public offering priced at the bottom of a marketed range.

Canada Pension Plan Investment Board and Select Equity Group LP had indicated an interest in buying shares worth as much as $350 million in connection to the IPO, according to the company’s filings with the U.S. Securities and Exchange Commission.

PowerSchool, based in Folsom, California, provides software used by school districts and organizations serving 70% of all K-12 students in the U.S. and Canada, according to the filings. It’s one of several education technology companies that have benefited during the coronavirus pandemic, as many countries mandated remote learning to curb the spread of the virus.

Vista Equity agreed in 2015 to acquire PowerSchool for $350 million from Pearson Plc, after the education giant announced a carve-out plan earlier that year, according to a statement at the time. In 2018, Onex bought a stake from Vista Equity and also invested in the company. Funds associated with Vista and Onex will each control about 39% of the shareholder voting power after the IPO.

For the three months ended March 31, PowerSchool had a net loss of $2 million on revenue of $118 million, according to its filings.

The offering is being led by Goldman Sachs Group Inc., Barclays Plc, Credit Suisse Group AG and UBS Group AG. The shares are trading on the New York Stock Exchange under the symbol PWSC.