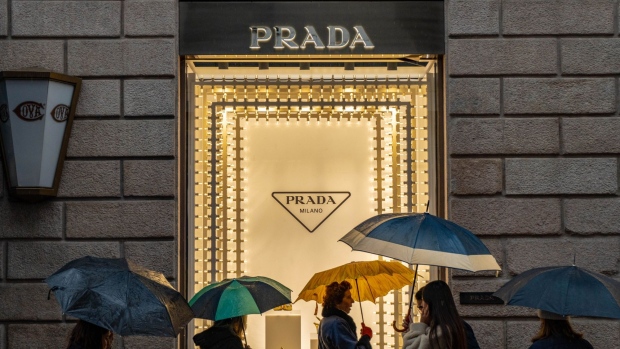 Detail of a Prada Cleo satin bag with appliques inside the window display of a Prada SpA store in Milan, Italy, on Wednesday, Nov. 17, 2021. Prada Chief Executive Officer Patrizio Bertelli plans to put his son Lorenzo in charge of the Italian fashion company within the next three years, a generational shift aimed at keeping the business under family control. Photographer: Alessia Pierdomenico/Bloomberg , Bloomberg

Guerra, 57, is a former CEO of eyewear giant Luxottica and Italian food specialist Eataly and most recently was the head of LVMH Moet Hennessy Louis Vuitton SE’s hospitality division.

The move clarifies the immediate succession plans at Prada, one of a number of Italian family-controlled companies that have faced growing questions about leadership as their founders age.

Founded in 1913 by Mario Prada, the Milan-based purveyor of bags, trunks and travel accessories has always retained family control of a group that now generates annual revenues of more than €3 billion ($3.1 billion). Most recently Lorenzo Bertelli, the founder’s great grandson, has taken a higher-profile role in the business, and currently serves as marketing chief.

Guerra’s appointment is meant to “ease the succession of Lorenzo Bertelli, the future leader of the group,” according to a statement Tuesday. Guerra will also be tasked with achieving “steady and sustainable growth.”

Miuccia Prada, granddaughter of Mario, will maintain her role as executive director. Bertelli will become chairman, while the current holder of that role, Paolo Zannoni, will become executive deputy chairman.

Prada raised $2.1 billion in 2011 by listing in Hong Kong at a time when large luxury brands were flocking to the Asian market to cater to their largest customer base. The fashion house is also currently exploring a secondary listing in Europe.

The brand, known for its Galleria handbags, had a challenging pandemic as it’s heavily exposed to Asia which has been badly affected by Covid-19. In July, however, Prada reported a rebound in first-half revenue backed by strong sales in Europe and the Americas.

Guerra has a long history in fashion and spent a decade running Luxottica, the Italian sunglass company which later merged with a French maker of lenses to become EssilorLuxottica. The combined eyewear group makes glasses for Prada and Miu Miu, another group label.

Jefferies analyst Flavio Cereda has previously said in a note that Guerra would add “invaluable experience and significant gravitas” to the management team as Prada initiates a longer-term succession plan.