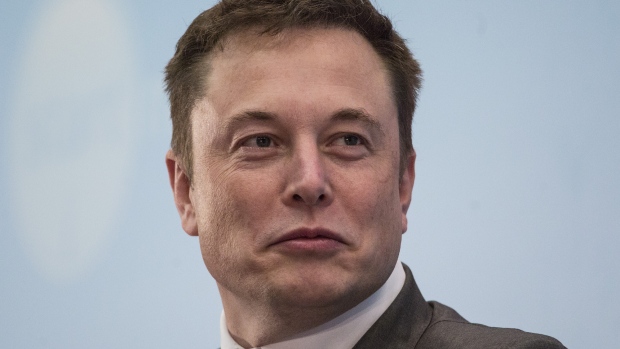 (Bloomberg) -- With Elon Musk’s Twitter feed under scrutiny like never before, Tesla Inc. investors are likely hoping he sits out a holiday he’s observed in the past: April Fools’ Day.

Both Tesla and Musk have a colorful history of April 1 gags. While some past stunts have been fun and immaterial, others have impacted the carmaker’s share price -- a result the chief executive officer probably wouldn’t want to risk three days before his trigger-happy tweeting activity goes before a federal judge in Manhattan.

Last year’s April Fools’ antics were Musk’s most controversial. The billionaire first sent a tweet teasing “important news in a few hours,” without giving any further detail. He then sent a series of satirical posts joking that Tesla had gone “bankwupt,” having filed for “Chapter 14 and a half (the worst one).”

Although the series of tweets made clear references to April 1, Tesla shareholders -- who had just endured the worst month for the stock in seven years -- didn’t enjoy the joke. The shares fell 5.1 percent the next day, shaving $2.3 billion off the market capitalization for the Palo Alto, California-based company.

It wasn’t the first time Tesla shares moved on an April Fools’ Day prank. The electric-car maker issued a press release in 2015 announcing a new product line called the Model W -- with the W standing for watch -- right around the time Apple Inc. was moving into wearable devices. Tesla briefly added more than $100 million in market cap.

While Musk’s has been quiet on Twitter thus far Monday, he had an eventful weekend on his favorite social network. Some of his posts were more typical of a CEO, such as one sharing a photo of a Tesla Semi truck he said was delivering the company’s cars.

In a series of posts that were more head-scratching and April Fools-like, Musk shared an auto-tuned tribute song for Harambe, the gorilla killed at the Cincinnati Zoo in 2016 that became an Internet sensation. The SoundCloud link he tweeted lists his name as the artist.

Last year, Musk’s tweets about taking Tesla private resulted in $40 million in fines, the appointment of independent directors and his ousting from the chairman role. While the CEO agreed months ago to pre-clear all posts containing material information about the company with an in-house securities lawyer, a tweet he sent in February forecasting the company’s vehicle production got him in trouble again, with the SEC saying it was material, misleading and hadn’t been vetted as required.

Strange as Musk’s posts may have been over the weekend, Tesla shares rose as much as 2.1 percent shortly after the open of regular trading Monday.

To contact the editors responsible for this story: Crayton Harrison at tharrison5@bloomberg.net, Jonathan Roeder