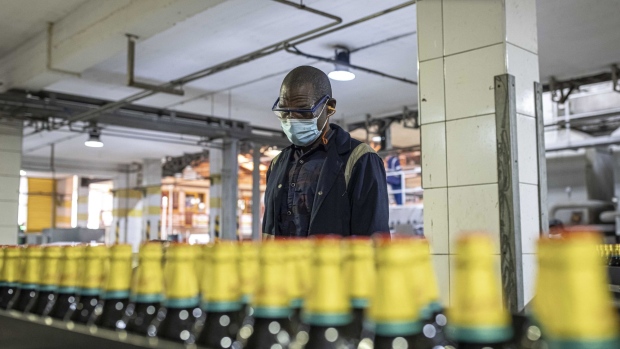 A worker checks bottles of Guinness as they move along a conveyor at the Kenya Breweries Ltd. bottling plant, operated by East Africa Breweries Ltd., in Nairobi, Kenya, on Thursday, July 14, 2022. East African Breweries has ramped up imports of spirits to avoid any stock-outs amid global supply-chain hangovers, according to Group Chief Financial Officer Risper Genga Ohaga. , Bloomberg

(Bloomberg) -- East African Breweries Ltd., the Kenyan unit of Diageo Plc, sees its more expensive beers and spirits propping up sales even as accelerating inflation in the region deters consumption of branded alcohol.

Consumers of the company’s beers such as the century-old Tusker lager are hurting from surging fuel and food prices, and some have even switched to illicit liquor, according to EABL’s Group Managing Director and Chief Executive Officer Jane Karuku.

Rising prices in East Africa’s biggest economy coupled with an increase in excise duties has prompted EABL to raise rates for its beverages. The country’s next president -- Kenyans are voting to elect their leader Tuesday -- will need to focus on ways to reduce the cost of doing business to spur economic growth.

“We know for a fact scientifically that if you increase to a certain price point, you know there is a decline in volume,” Karuku, 60, said, referring to excise taxes. “We put this in front of government officials all the time.”

The two main presidential aspirants --Raila Odinga and William Ruto -- have also pledged to ease the cost of living in the country.

Kenya’s laws allow the revenue office to increase the specific rate of excise duty annually to factor in inflation. The levy on alcoholic beverages was increased by as much as 20.3%, according to a June 30 note by Ernst & Young Kenya.

Diageo’s unit also remained relatively immune from the supply shock created by Russia’s invasion of Ukraine as it sources 80% of its products locally. Still, the depreciation of the shilling to a record low against the dollar has increased costs of some inputs, the CEO said.

The company, 50% owned by Diageo, plans to boost its capital expenditure this year from the 13 billion shillings ($109 million) it spent in the year ended June 30, Karuku said. EABL will spend on advertising, improving productivity and environmental, social and governance projects, she said.

“We have three million drinking-age consumers coming onto the market across East Africa,” Karuku said.