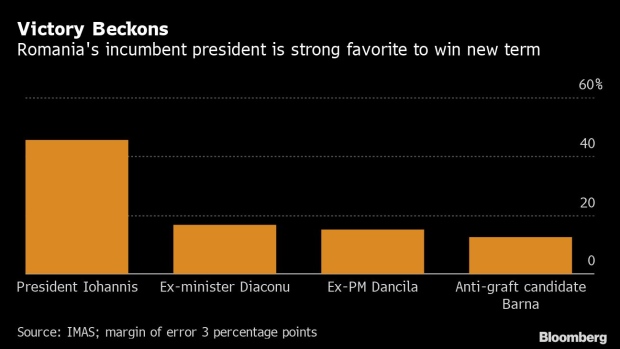 (Bloomberg) -- He helped put Romania’s most powerful politician behind bars for corruption and steer his country back toward the European Union’s mainstream.

This weekend, voters are likely to reward President Klaus Iohannis by setting him on course for a second term.

Iohannis has been a steadying force in a nation where chaos has become the norm. Five prime ministers have come and gone since he was elected in 2014, while Bucharest has seen its biggest protests since communism collapsed three decades ago.

The unrest was sparked by attempts to ease punishments for crooked officials and keep the head of the governing Social Democrats out of prison. The reforms raised similar rule-of-law concerns to those that have turned Hungary and Poland into villains in Brussels.

Now citizens are heading to the polls on Sunday to pick between Iohannis and 13 other candidates. Turnout stood at 38% at 5 p.m. local time, a similar level to five years ago.

“It’s been very difficult to decide who to vote for, I had to do it by process of elimination, so 30 years after the fall of communism I still had to pick the lesser evil because I do my civic duty,” 57-year-old Mihai said outside a voting station in Bucharest. “Iohannis will probably end up facing one of the other candidates in the second round, it doesn’t even matter who.”

Iohannis, 60, helped repel and delay controversial judiciary legislation long enough that the ruling-party boss was eventually convicted and sentenced to jail time. His replacement, Viorica Dancila, halted the plans, avoiding the risk of EU sanctions before her government was toppled last month.

“Iohannis carved out a strong position for himself within Romania’s semi-presidential political system,” said Andrius Tursa, an analyst at Teneo Intelligence. “He acted as a stabilizing force, sustaining the country’s pro-Western course in foreign relations, supporting anti-corruption efforts, and -- in most cases -- opposing populist policies.”

Iohannis has a commanding lead heading into Sunday’s first round of voting, though seems set to fall short of the 50% needed to settle the contest straight away. Dancila, former Culture Minister Mircea Diaconu and leader of the anti-graft Save Romania Union, Dan Barna, are battling for a place in a runoff two weeks later.

But the incumbent’s first term wasn’t a total success. Despite objections, he was unable to curb government spending that’s pushed the budget deficit toward EU limits. Nor could he stop the Social Democrats from firing anti-graft crusader Laura Codruta Kovesi, who was recently appointed as the bloc’s first top prosecutor.

The EU said in October it would maintain judicial monitoring of the country of 20 million. The scrutiny has been in place since Romania joined in 2007, keeping it out of the passport-free Schengen area.

Iohannis’s critics say he lacks energy and is reactive more than proactive. Challenger Barna called him a “firefighter for when the house is on fire,” saying that if he’d been more engaged in recent years, there may have been fewer “fires.”

Iohannis, for his part, dubbed himself “an atomic firefighter who prevented Romania from collapsing.”

He’s certainly been involved of late, selecting Liberal Party head Ludovic Orban to form a new government that took power this week. He may also lead Romania through its first-ever snap elections early next year.

Aside from corruption, voters grumble about poor infrastructure and health care, with many still seeking higher-paid work in the continent’s west.

But while these longstanding gripes look set to reduce the absolute number of people backing Iohannis, his chances of another five years in office are strong.

“I’ll vote for Iohannis,” said Paul Andone, a 45-year-old mechanic and entrepreneur. “He saved us from the Social Democrats and now he can do more things because he has the new government he wanted. I hope they manage to change things.”

(Updates with turnout in fifth paragraph.)

To contact the editors responsible for this story: Andrea Dudik at adudik@bloomberg.net, Marion Dakers, James Amott