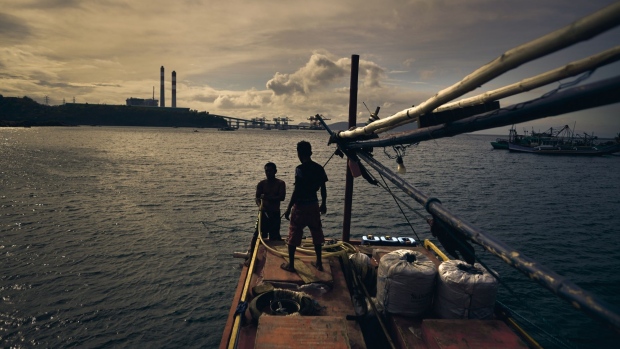 MARIVELES, PHILIPPINES - MAY 18: Filipino fishermen prepare their boat to sail to the West Philippine Sea despite harassment by Chinese militia and coast guard in the disputed waters on May 18, 2021 in Mariveles, Bataan, west of Luzon in the Philippines. Local fishermen bewail the Philippines lackluster stance on its claim of the West Philippine Sea waters against China's incursion, and are continuing to fish as long as they legally can. Fishermen also expressed disappointed at a recent remark by Philippine President Rodrigo Duterte, that retaking of West Philippine Sea was never his campaign promise. Prior to Duterte's presidency, the Philippines won a landmark arbitral case against China in 2016, which invalidated the the latter's claims in the South China Sea including islands and shoals within the country's 200-nautical mile exclusive economic zone. (Photo by Jes Aznar/Getty Images) , Photographer: Jes Aznar/Getty Images AsiaPac

(Bloomberg) -- Four presidential aspirants in the Philippines had varying strategies to resolve disputes in the South China Sea including through building alliances with other nations and boosting military presence in the region, according to interviews with GMA News.

“Our court victory should be our leverage,” Robredo said. She said a coalition of nations could be formed against China’s militarization of the disputed sea, banking on the 2016 ruling of the Hague-based Permanent Court of Arbitration which rejected China’s nine-dash claim.

Lacson said the Philippines should strengthen alliances with the U.S., the European Union, Japan, Australia and other countries with strong militaries. Pacquiao said the Philippines shouldn’t allow itself to be bullied by China and sought more discussions on the issue, while Moreno pointed out the need to bolster the country’s military presence in the South China Sea.

The four presidential candidates, competing in the elections scheduled for May 9, all said they’re in favor of joint exploration in the South China Sea, with Robredo clarifying that her stance is premised on all parties’ recognition of the arbitral ruling.

Here are the candidates’ stance on various issues: