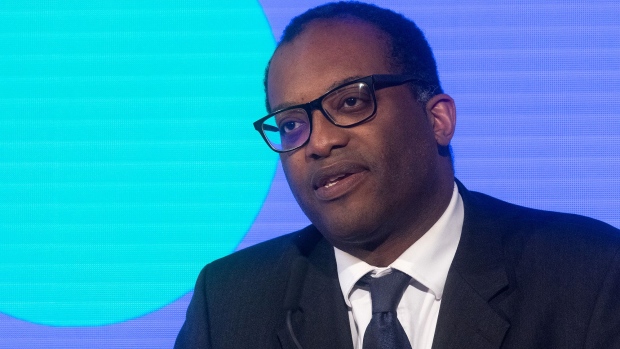 (Bloomberg) -- UK Chancellor of the Exchequer Kwasi Kwarteng faces calls from members of the ruling Conservative Party to reverse a package of planned tax cuts that sparked days of turmoil in financial markets.

Having stayed largely quiet -- at least in public -- since Kwarteng announced the biggest package of unfunded tax cuts in half a century on Friday, the mood among Tory MPs appeared to darken significantly on Wednesday as the Bank of England staged a dramatic intervention to stave off a crash in the gilt market.

“This inept madness cannot go on,” one Tory MP, Simon Hoare, said on Twitter. Another, Robert Largan, welcomed some measures but said Kwarteng had made a “mistake” in cutting the top rate of income tax.

The growing anguish reflects the electoral fallout facing the Conservatives, who have been in power since 2010 but according to a YouGov poll now trail the opposition Labour Party by a record 17 percentage points. Another YouGov survey on Wednesday found Britons are now twice as likely to trust Labour to deliver economic growth compared to the Tory government.

On Wednesday, executives at some of the City of London’s biggest firms told Kwarteng that he shouldn’t wait until his November budget to reveal how he intends to pay for the package of spending and tax cuts outlined last week.

In private, other MPs are even more critical of the chancellor, with one saying lawmakers are openly discussing his future and whether he should quit. The problem is that the party knows that while Kwarteng would be the most obvious fall guy for any U-turn, MPs also know that the policies are as much new Prime Minister Liz Truss’s as they are Kwarteng’s.

The situation is particularly galling for Tory MPs because the majority of them didn’t back Truss in the leadership contest precisely because they feared the outcome of her approach to the economy. In August, former Deputy Prime Minister Dominic Raab -- who supported Truss’s rival for the top job, Rishi Sunak -- had called her tax cut plans an “electoral suicide note.”

On Wednesday, the government made clear it has no intention of changing course in the face of market -- and party -- pressure. “We think they’re the right plans because those plans make our economy competitive,” City Minister Andrew Griffith said in a BBC interview.

Chris Philp, chief secretary to the Treasury, said on  ITV’s “Peston” program that there would be no delay to the government’s tax-cutting policies and that ministers would stick to the timetable of unveiling the medium-term fiscal plan on Nov. 23.

Philp also refused to confirm the government’s previous stance of increasing welfare payments in line with inflation in the autumn, as promised by former Chancellor Rishi Sunak.

The government’s economic stance will require a major defensive effort by Truss and Kwarteng at the Conservative Party’s annual conference in Birmingham next week. Amid the backlash, there are reports some senior Tories are choosing to stay away.