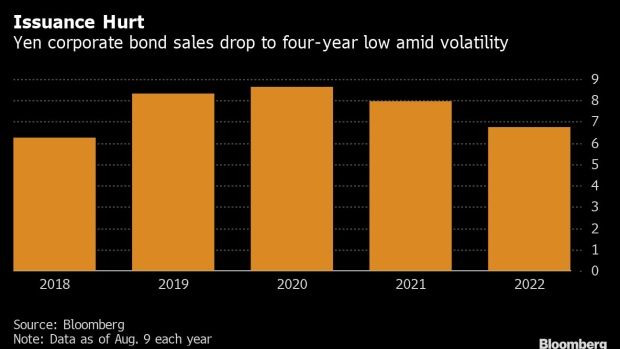 (Bloomberg) -- A feature that long set Japan’s credit market apart internationally and frustrated investors may finally be starting to change.

While book building in Japan is typically conducted over a period of five days, borrowers like Japan International Cooperation Agency and Nidec Corp. now say it would be good to reduce the time span for marketing some new deals. Shortening the process to something like two or three days would bring the country more in line with the US and Europe, where transactions often close in less than 24 hours.

While small institutions with little in-house expertise appreciate having the time to scrutinize deals, Japan’s lengthy marketing period can be problematic for investors if it leaves them trapped with lower yields because rates shift between the time they placed an order and the transaction getting sealed. With volatility making it harder to get deals over the finish line, issuers who spoke to Bloomberg stressed the need strike the right balance among groups of potential buyers.

“It’s crucial to price deals quickly when rates are moving every few hours,” said Junko Takahashi, senior director of the treasury and finance accounting department at JICA, which regularly sells bonds in both the domestic and overseas markets. “We would like our yen bonds to price fast, in line with our foreign-currency bond schedules.”

Speculation that the Bank of Japan’s years of ultra easy policy might eventually end contributed to an increase in spreads on yen-denominated corporate bonds. They rose 16 basis points to 53 basis points this year, according to a Bloomberg index. While that’s not a huge move by global standards, it’s the biggest jump since 2011, the data show.

In interviews with Bloomberg News, Japan Post Insurance Co., Asset Management One Co. and Nissay Asset Management Co. said that regular issuers can easily cut the bookbuilding period for senior bond issuance, which would help to smooth the process amid swings in the market. That’s just one of the changes that investors are calling for, including for pricing deals on a spread basis.

“We’ve had a hard time committing to pricing as rates have been volatile recently,” said Masahide Komatsu, a senior fund manager in the global credit investment department at Japan Post Insurance, who manages the equivalent of $23 billion in corporate and agency notes.

He’s pushing for more flexibility to alter his orders if market fluctuations affect bond pricing under the current system, which he says is too restrictive.

Nidec, a Kyoto-based precision motor maker, said it would welcome being able to get deals done quicker at times of volatility.

Both JICA and Nidec, though, stressed that they still want to make sure that bonds can be bought by smaller investors, such as regional banks, which don’t necessarily have dedicated credit experts and might need a few days to consider offerings. That has been one of the reasons why bookbuilding is typically lengthy in Japan.

Changing tack might also facilitate issuance in Japan, where companies traditionally have relied on loans. As a share of economic output, Japan’s corporate debt market is far smaller than that of the US.

The change might not be suitable for complex deals like hybrid notes. But “we’d only need one to two days for debt like senior bonds with high ratings by frequent issuers,” said Tamami Fujita, lead credit analyst at Nissay Asset Management, which has the equivalent of some $253 billion under management.