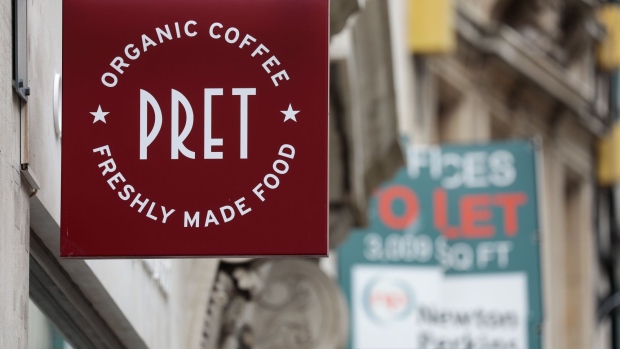 A sign hangs from a branch of a Pret A Manger Ltd. restaurant in London, U.K., on Monday, Sept. 7, 2020. U.K. workers are proving reluctant to go back to their offices. Photographer: Jason Alden/Bloomberg , Bloomberg

As the sandwich chain expands across the UK, where prices are climbing at the fastest pace since 1982, Pret’s working on more affordable menu items such as cheese twists and pastel de natas, which will each cost less than £2 ($2.48) when they debut in July.

“There will come a point where the pinch is so hard on people’s purses that they will pull back on things,” Chief Executive Officer Pano Christou said in an interview. “How can we ensure that we have the right offer for people to think Pret is attractive when they’re counting their pennies more?”

The price pressures squeezing UK consumers extend from gasoline to electricity to groceries and look set to worsen before they subside. The Bank of England this month warned of double-digit inflation later this year and the risk of recession, conjuring fears of a return to 1970’s-style stagflation.

As Britons confront the new economic realities, Christou said Pret is taking cues from the success of cheaper rival Greggs Plc, a national chain famed for its £1.25 sausage roll and chicken bake pastries. Greggs has attained a popularity in the UK that extends to nail art complete with a sausage roll charm and a clothing line that debuted this year in partnership with fast-fashion retailer Primark.

Pret is working to evolve from “a more white-collar worker staple in urban centers and transport locations into a real national brand,” the CEO said. The chain plans to open its second store in Newcastle, where Greggs is headquartered, later this year — one of about 40 new UK outlets outside of central London planned for 2022.

To capture a more cost-conscious customer base, Pret this month gave its menu the biggest overhaul since the outbreak of Covid, introducing rye rolls, new salads and new cakes. But it’s also charging more for some items. That includes its monthly coffee subscription — popular, Christou said, with builders and younger students — and now priced at £25 instead of £20.

“This is not just about taking price and passing it on,” he said. “This is about looking at what the competition does, ensuring that we are attractive and that we have the right value proposition.”

Christou, 44, started at the company almost 22 years ago and rose through the ranks to become CEO in 2019.

The chain’s new focus on suburban locales reflects the seismic shift in habits wrought by Covid. More people are working from home — at least part of the time — a change that looks set to outlast the pandemic.

With more than three-quarters of its UK stores in central London, Pret was hard hit by the lockdowns of the past two years. Its earlier “follow-the-skyscraper” strategy left the chain especially exposed to disruptions in the capital’s financial districts and curbs on tourism, which hurt business in the West End entertainment and shopping zone.

Bloomberg’s Pret Index, which tracks the company’s shops across parts of the UK and abroad, shows that sales in London’s financial hubs haven’t fully rebounded from Covid-19. Demand is weaker on Mondays and as much as 80% lower on Fridays than in the middle of the week, Christou said, indicating many employees prefer to work from home on days that straddle the weekend.

In London’s suburbs, by contrast, Pret’s sales have shot past pre-pandemic levels, while those in Yorkshire, in the north of England, have been on a tear.

Last year, owners JAB and co-founder Sinclair Beecham invested £100 million in the chain’s turnaround and expansion, which targets store openings in the US and Middle East.

In its home market, Christou is seeking to broaden Pret’s appeal by opening drive-through stores and selling frozen croissants in supermarkets, as well as by adding cheap snacks and desserts to the menu to complement its line of coffees and teas.

“It’s definitely a topic of conversation, how we can innovate to a more affordable range,” Christou said.