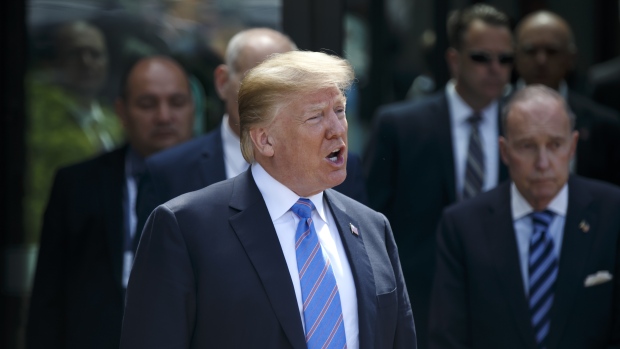 U.S. President Donald Trump speaks to members of the media following a meeting during the Group of Seven (G7) Leaders Summit in La Malbaie, Quebec, Canada, on Saturday, June 9, 2018. Trump proposed the complete elimination of all barriers to international trade at a Group of Seven summit, a move that turns the tables on allies who accuse the U.S. of wielding protectionist policies. , Cole Burston/Bloomberg

U.S. President Donald Trump said NAFTA negotiators are “pretty close” to agreeing on some kind of sunset clause, a sticking point in talks, while warning the three-way pact can only survive if major changes are made.

NAFTA was a key topic when Trump held a bilateral meeting with Canadian Prime Minister Justin Trudeau on Friday, with Trump later saying they had a "very, very good meeting on NAFTA." A frenzied effort last month to reach a deal that could pass the current U.S. Congress by the end of this year has stalled, in part after Trudeau’s final push ran up against Trump’s insistence on a five-year sunset clause that would see the pact renegotiated or killed after five years.

Any NAFTA deal will have a sunset provision of some kind, Trump said Saturday, though he indicated some people are pushing against a five-year time frame. “We’re pretty close on the sunset division,” he said.

The president also signaled that his Nafta partners would pay a bigger price if there’s no agreement.

Parsing Trump’s statements on NAFTA can by dizzying. On Friday, he reiterated a threat to quit the existing pact altogether if he doesn’t get his way, only days after White House economic adviser Larry Kudlow said Trump wouldn’t walk away.

And after the Trudeau meeting Friday, the White House released a statement saying “the two leaders and their delegations are close to a deal on NAFTA,” while U.S. Trade Representative Robert Lighthizer said a few weeks ago that the nations are “nowhere near close to a deal.”

Trump has long stated a preference for two-way trade accords. He and Trudeau discussed the notion of a bilateral deal when they met Friday, according to a White House statement. They also discussed speeding up talks and the future of NAFTA, a Canadian government official said late Friday. Canada is focused on maintaining a trilateral pact, the official said.

The window to pass a deal in this Congress has almost certainly closed, observers say, and Mexico will elect a new president on July 1. That means the NAFTA process -- negotiating a deal, and then passing it in each country -- is almost certain to run into 2019.

--With assistance from Toluse Olorunnipa and Jennifer Epstein.