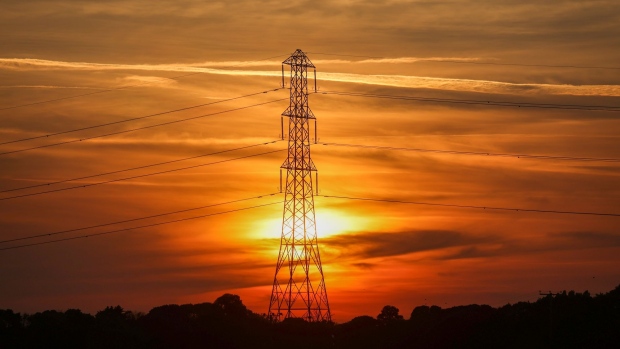 An electricity transmission tower during sunset near Bradwell on Sea, U.K., on Tuesday, Sept. 21, 2021. U.K. Business Secretary Kwasi Kwarteng warned the next few days will be challenging as the energy crisis deepens, and meat producers struggle with a crunch in carbon dioxide supplies. Photographer: Chris Ratcliffe/Bloomberg , Bloomberg

The failure of energy suppliers in the U.K. could continue to pile up because of persistent volatility in power and natural gas prices, according to the chief executive of one of the companies that still remains in the market.

Household energy suppliers are struggling but the strain is also affecting those that sell to businesses, potentially widening the impact of the crisis, Bill Bullen, CEO of Utilita Energy Ltd. said in an interview with Bloomberg Radio. The struggle has been so severe that 25 firms have failed in the past six months, affecting more than 4 million households and piling pressure on the government to act.

“A lot of companies are going to see continued stress,” he said. “That’s not just in the residential sector” but may spread to power providers to businesses.

British consumers are so far being shielded from the worst impact of the crisis by a price cap. That could change dramatically with regulator Ofgem due to announce a higher limit in February. Surging bills could hit 22 million customers in April, potentially impacting retail spending power.

“This is without a doubt the biggest single change in retail prices that we’ve seen,” Bullen said.