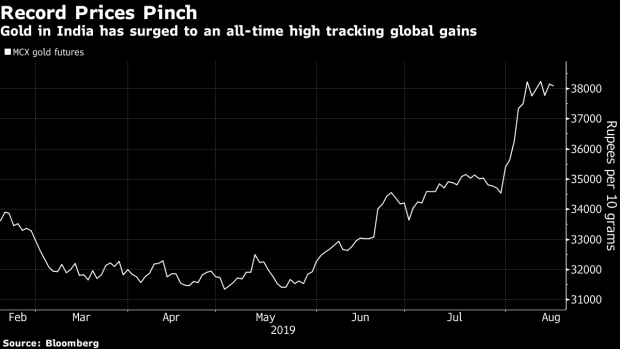 A worker labors on a six kilogram gold crown ahead of the Ganesh Chaturthi festival at a P.N. Gadgil Jewellers Pvt. workshop in Pune, India, on Monday, Aug. 17, 2017. About three quarters of the estimated $45 billion of the precious metal that is traded in the country each year makes its way through thousands of family-run jewelry shops that have catered for centuries to the nation's love of gold. Photographer: Dhiraj Singh/Bloomberg , Bloomberg

(Bloomberg) -- Jewelers in India, the top consumer after China, are facing a bleak outlook as record high prices and fading demand threaten to drag annual gold sales to the lowest in three years.

With demand growing 9% during the January-June period, jewelers were expecting consumption to increase after a subdued couple of years. Those hopes are evaporating after a combination of high taxes, record prices, slowing economic growth and floods in the South Asian country are poised to erode demand in the peak festival season that begins later this month.

“Everything is hitting us at the same time,” N. Anantha Padmanaban, chairman of the All India Gem & Jewellery Domestic Council, said by phone. Full-year demand is expected to be at par with 2016, when consumption slumped to a seven-year low of 666 tons, as buyers restrict themselves to wedding-related purchases, he said.

India’s consumption of gold has been affected by the government’s efforts to curb its trade deficit and measures to discourage investors who used the metal to evade taxes. Prime Minister Narendra Modi’s administration increased the import tax on the precious metal in July, which pushed domestic prices to an all-time high of 38,666 rupees ($541) per 10 grams last week. Gold futures in Mumbai have gained about 17% since June on local factors and in tandem with overseas spot gold, which has rallied to a six-year high as the U.S.-China trade war plays out.

The higher prices coincide with a slowdown in the Indian economy. Latest high-frequency indicators from auto sales to exports show demand at home and abroad is waning. A lingering crisis among shadow banks has curbed borrowings by consumers and companies, and an uncertain monsoon is casting a shadow on rural consumption and wages. Imports, which comprise almost all the gold that India consumes, slumped to the lowest monthly inflow in July since at least March 2016.

“Everybody is asking the organization to do something to promote sales. But prices have to settle down,” Padmanaban said. “Even if we do a festival, at these prices customers won’t react immediately.”

Often consumer demand in the second-half of the year is more than 400 tons but it will be closer to 300 tons this year, Georgette Boele, senior FX and precious metals strategist at ABN Amro Bank NV, said in an email. India’s purchases during January to June totaled 372.2 tons, according to the World Gold Council, the highest for the period since 2013.

With recession fears shaking the global market as the trade war drags amid a turmoil in the equity and bond markets, gold will continue to climb further with many analysts forecasting a run up to $1,600 an ounce level.

“Buying in the first half year was heavy, not just due to a high number of auspicious days in the period but because some buyers bought early in anticipation of higher prices and clearly they were right to do so,” according to Rhona O’Connell, head of market analysis for EMEA and Asia regions at brokerage INTL FCStone Inc.

The erratic Indian monsoon, which waters more than half of the country’s farmland, has been adding to concerns about demand as scant rains and floods affect crops and rural income. Farm incomes in India drive bullion purchases.

“It is easily foreseeable that this market will be under stress for the rest of this year,” O’Connell said by email. “There will come a point when the market adjusts to higher prices but that may be some way off yet.”

The monsoon rains were initially delayed and later gave way to heavy showers that caused floods in at least four states including the biggest gold-buying southern Indian provinces of Kerala and Karnataka. As of Monday, the death toll rose to about 189 in Kerala and Karnataka, with the two states evacuating almost a million people to safer places.

Jewelers usually start stocking up during this period for India’s festival season, which starts from late August and runs till October, and is followed by the wedding season.

“Our advise to all the jewelers is that at least for the next 40 days they have to lie low, not to invest much in jewelry, start selling whatever you have and then replace it,” Padmanaban said. “Imports will be weak.”

To contact the editors responsible for this story: Phoebe Sedgman at psedgman2@bloomberg.net, Alpana Sarma, Unni Krishnan